An investigative television journalist has been raped and murdered in Bulgaria‘s northern town of Ruse, according to officials.

The body of 30-year-old Viktoria Marinova, whom authorities identified only by her initials, was found on Saturday in a park, Ruse regional prosecutor Georgy Georgiev said on Sunday.

“Her mobile phone, car keys, glasses and part of her clothes were missing,” he said.

She was killed by blows on the head and suffocation, Georgiev said, adding that prosecutors were probing all leads – both personal and linked to Marinova’s job.

Interior Minister Mladen Marinov later confirmed to journalists that the victim had also been raped.

Prime Minister Boyko Borisov expressed hope that the investigation would succeed because of the “work that has been done”.

“Thanks to the large amount of DNA material collected it is just a matter of time before the perpetrator will be found,” he said.

Police sources told the AFP news agency that the crime did not immediately appear linked to her work.

The OSCE’s media freedom representative Harlem Desir condemned Marinova’s killing on Twitter: “Shocked by horrific murder of investigative journalist Victoria Marinova in #Bulgaria. Urgently call for a full and thorough investigation. Those responsible must be held to account.”

The last episode of the show on September 30 broadcast interviews with investigative journalists Dimitar Stoyanov from the Bivol.bg website and Attila Biro from the Romanian Rise Project, about an investigation of alleged fraud with EU funds linked to big businessmen and politicians.

The pair were briefly detained by police, drawing condemnation from Reporters Without Borders (RSF).

“We are in shock. In no way, under any form, never have we received any threats – aimed at her or the television,” a journalist from TVN told AFP under a condition of anonymity, adding that he and his colleagues feared for their safety.

In a statement on their Facebook page, Bivol.bg insisted for police protection of Marinova’s colleagues.

A candlelight vigil in Marinova’s memory is organised for Monday evening in Sofia. 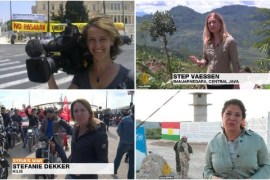 What challenges do female journalists face?

Women on the front lines of journalism discuss their work and what motivates them as storytellers. 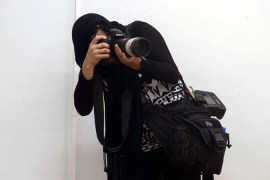 On the front lines with female journalists