Jerusalem – Ahmad Tibi, a prominent Arab member of Israel’s Parliament, said a solution to the Israeli-Palestinian conflict under US President Donald Trump would be impossible.

Speaking to Al Jazeera from his office in the Knesset, Tibi said there is no political solution in the cards, despite US statements to the contrary.

“There was nothing on the horizon when Trump came to power, and now that he is in power, a solution is impossible,” he said.

Tibi also dismissed the so-called “deal-of the-century”, which, according to media reports offers the Palestinians a state in Gaza and parts of the West Bank, minus Jerusalem.

According to Tibi, Trump and his allies have made a radical departure from previous US policies, especially on the issues of Jerusalem and illegal Israeli settlements.

Prior to Trump’s recognition of Jerusalem as Israel’s capital, US policy considered the city occupied territory and a subject to final status talks between the two sides.

“No doubt that the Trump decision is a complete adaptation of the Israeli narrative about Jerusalem and is a complete departure from the US foreign policy on the Middle East,” Tibi said.

In 1947, the UN’s partition plan in Palestine envisioned dividing the territory into two separate states, but would have left Jerusalem under an international administration.

However, Tzachi Hanegbi, Israel’s minister of regional cooperation, told Al Jazeera that Trump’s decision on December 6 should not hinder Palestinian claims to have occupied East Jerusalem as their capital.

“We claim that Jerusalem is our capital and should not be divided, but that’s only a claim, not a diktat,” Hanegbi, a member of Prime Minister Benjamin Netanyahu‘s Likud party, told Al Jazeera.

“Palestinians can claim East Jerusalem as their capital and we can negotiate a settlement. Although we annexed East Jerusalem, it is still up for negotiations,” said Hanegbi.

Jerusalem remains at the core of the perennial Israel-Palestine conflict.

Israel occupied the city’s eastern sector in 1967 and proceeded to annex it in breach of international law.

Palestinian leaders want occupied East Jerusalem as the capital of their future state, while Israel insists that the city is its indivisible capital.

“Trump changes all that, and gives Netanyahu a gift in the same month he was subjected to a corruption investigation by Israel’s Attorney General Office,” Tibi told Al Jazeera.

Netanyahu is currently facing criminal proceedings over allegations of corruption and financial improprieties that may threaten his position as prime minister.

Trump’s move, according to Tibi, disqualified the US as a mediator in the conflict.

“The Americans were not honest brokers in general, but at least they were brokers,” he said, adding: “Trump instantaneously disqualified himself as a broker by taking Jerusalem off the negotiating table and completely ignoring the Palestinians and his Arab allies.”

Tibi dismissed press reports about the so-called “deal of the century”, which reportedly enlisted Saudi Arabia to pressure Palestinians into accepting a state in Gaza and parts of the West Bank, minus East Jerusalem.

The purported deal would have given the outlying Jerusalem suburbs of Abu Dis and Silwan to the Palestinians to call it their capital. “This is just not true,” Tibi said.

According to discussions Tibi had with high-level Palestinian leaders in Ramallah, Saudi Arabia did not pressure Palestinian President Mahmoud Abbas into accepting the “deal”.

“What has been published about Saudi Arabia pressuring Abbas to accept the so-called deal is not true. On the contrary, the last meeting between (Crown Prince Mohammad) bin Salman and Abbas was very positive, in which the Saudi side has stressed that Jerusalem is a red line,” he added.

Tibi told Al Jazeera that what White House advisors “have in mind regarding solving the conflict does not even meet the minimum requirements the Palestinians can accept”.

Tibi attributed what he called Trump’s lopsided approach to solving the conflict to advice the president receives from his “hardline Jewish advisors”.

“Trump is not been advised by liberal Jews, who would be more comparably reasonable in their approach to the conflict, rather by Jewish hardliners,” he said.

He stressed that the conflict in the Middle East is about more than just real estate.

“It is a nationalistic struggle between two nations,” Tibi said. 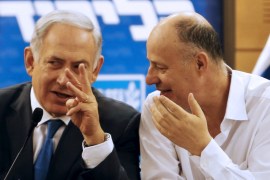