Officials in Cape Town have brought forward “Day Zero”, the date when taps are expected to run dry in the South African city.

The taps will be turned off when the reservoirs serving Cape Town drop below the minimum levels needed to provide water safely.

The extreme water shortage follows three consecutive years of drought, and if Day Zero arrives, Cape Town would be the first metropolis in the world to run out of water.

The level of Theewaterskloof Dam, once Cape Town’s biggest provider of water, is currently estimated at less than 10 percent. The area is currently an arid piece of land, with hardly any water in sight.

Once the water has been turned off, no water will come out the taps, fire services would be unable to extract water from fire hydrants, and residents would not be able to flush their toilets.

Instead, locals would have to go to collection points for a daily ration of 25 litres.

Christine Colvin, senior manager at the World Wildlife Fund’s Fresh Water Program in South Africa says it is imperative that the people of Cape Town arm themselves with relevant information, and they make sure they have enough water to drink.

“Make sure you’ve got an emergency store of drinking water at home. Have at least 10 litres of bottled drinking water per person in your household,” she said.

In an effort to stave off the crisis, starting on February 1, the city is lowering the daily allowance for residents from 87 litres down to 50 litres.

Water-saving posters have been put up in every corner of the city and tips urging people to conserve supplies are abound on social media.

The government has also implemented a controversial online water consumption map, which allows residents to check up on their neighbours’ water habits based on households’ municipal bills.

This is the dry season in South Africa, so despite the conservation efforts, the heavy, persistent rain needed to alleviate the drought is unlikely. 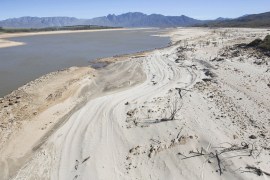 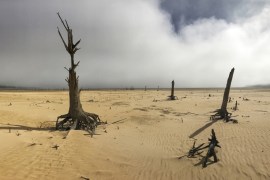