A veteran US diplomat has resigned from an international panel set up by Myanmar to advise on the Rohingya crisis, saying it was conducting a “whitewash”.

“The main reason I am resigning is that this advisory board is a whitewash,” Richardson told Reuters news agency in an interview, adding he did not want to be part of “a cheerleading squad for the government”.

His resignation comes as the 10-member Advisory Board was making its first visit to western Rakhine State, from where nearly 700,000 Rohingya Muslims have fled since August last year.

Richardson said he got into an argument with Aung San Suu Kyi during a meeting on Monday with other members of the board, when he brought up the case of two Reuters reporters who are on trial accused of breaching the country’s Officials Secrets Act.

He said Aung San Suu Kyi’s response was “furious”, saying the case of the reporters “was not part of the work of the advisory board”. The argument continued at a dinner later that evening, the former New Mexico governor said.

Aung San Suu Kyi’s spokesman, Zaw Htay, told Reuters on Thursday that the Advisory Board had met about the “Rakhine issue”.

“(Richardson) talked on a topic outside the agenda of the meetings and went beyond the framework,” Zaw Htay said. “We feel sorry for his resignation due to the misunderstanding.”

Reporters Wa Lone, 31, and Kyaw Soe Oo, 27, had worked on Reuters coverage of the crisis in Rakhine, from where 688,000 Rohingya have fled an army crackdown on the Rohingya since late August, according to estimates by the United Nations.

They were detained on December 12 after they had been invited to meet police officers over dinner in Yangon. The government has cited police as saying they were arrested for possessing secret documents relating to the security situation in Rakhine.

The Advisory Board for the Committee for Implementation of the Recommendations on Rakhine State was set up by Myanmar last year, to advise on enacting the findings of an earlier commission headed by former UN Secretary-General Kofi Annan.

The armed forces have been accused by Rohingya witnesses and human rights activists of carrying out killings, rapes and arson in a campaign senior officials in the UN and US have described as ethnic cleansing. Myanmar rejects that label and has denied nearly all the allegations.

Richardson said he was also “taken aback by the vigour with which the media, the UN, human rights groups and in general the international community were disparaged” during the last three days of meetings the board held with Myanmar officials.

“She’s not getting good advice from her team,” Richardson said of Aung San Suu Kyi, whom he said he has known since the 1980s. “I like her enormously and respect her. But she has not shown moral leadership on the Rakhine issue and the allegations made, and I regret that.”

Suu Kyi’s national security adviser, Thaung Tun, told Reuters he had escorted the other board members on a trip to Rakhine on Wednesday, but that Richardson had not taken part.

US State Department spokeswoman Heather Nauert called Richardson’s decision to resign from the board and his reasons for doing so “cause for concern”, but noted he had been acting as a private citizen in joining the board and visiting Myanmar, which was previously called Burma.

Richardson, a former US ambassador to the UN and energy secretary in the Clinton administration, also had harsh words for Surakiart.

The board chairman, he said, was not “genuinely committed” to implementing recommendations regarding the issues of Rohingya safety, citizenship, peace, stability and development.

Surakiart was travelling with other members of the board in Rakhine and did not respond to requests for comment.

Another board member, former South African Defence Minister Roelof Meyer, told Reuters the visit to Rakhine had been “very constructive”.

“If anybody would say that we are just a rubber stamp or a voice on behalf of the government that would be completely untrue, unfair,” he said. “We haven’t done any recommendations so far.”

Other members of the board, which also includes British doctor and politician Lord Darzi of Denham and speaker of the Swedish parliament Urban Ahlin, were not immediately available for comment.

Richardson said he declined to join the advisory board’s tour of a new repatriation camp in Rakhine State on Wednesday, instead travelling to Yangon.

Myanmar’s military said earlier this month its soldiers had taken part in the killings of 10 captured Muslim “terrorists” during rebels attacks at the beginning of September, after Buddhist villagers had forced the captured men into a grave the villagers had dug.

It was a rare acknowledgment of wrongdoing during its operations in Rakhine by the Myanmar military, which said legal action would be taken against members of the security forces who violated their rules of engagement and the villagers involved.

Richardson said he has asked the board to recommend that the Myanmar government set up an independent investigation into “the mass grave issue, especially as it pertained to … the involvement of the military”. He did not say how the board had responded.

The Rohingya crisis erupted after ARSA attacks on security posts in Rakhine on August 25 triggered a fierce military response. Myanmar says its troops were engaged in legitimate counterinsurgency operations.

The UN on Wednesday called on Myanmar to give aid agencies unhindered access to camps it has built for tens of thousands of Rohingya refugees after agreeing a deal with Bangladesh on their return. 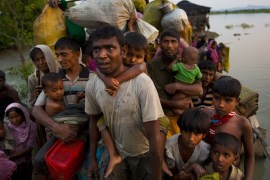 In an interview with Al Jazeera, Yanghee Lee says camps in Bangladesh are at risk of disease and landslides. 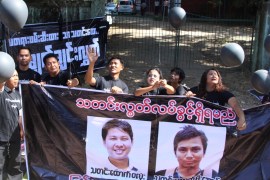