A powerful winter storm is sweeping across Turkey and the Levant, worsening conditions for those who have fled war.

Torrential rain and strong winds are lashing the region with powerful thunderstorms that are bringing large hail and even the risk of a tornado.

The severe weather comes just days after another system swept across the Levant bringing winds of up to 120 kilometres per hour (km/h) and heavy downpours.

The region is not well equipped to deal with torrential rain and the renewed downpours bring the real possibility of flooding, including in areas home to refugee camps.

The rains are likely to lead to torrents of water hurtling down hills, which could sweep away any tents that are constructed on the slopes.

In flat areas, water is likely to pool on the surface of the soil, which could flood tents and make them unsuitable for living purposes.

Wet weather will push across the whole of the Levant region, from Gaza to Turkey, tonight and into Tuesday morning. The heaviest downpours are expected from Lebanon northwards.

Southern Turkey, which is home to hundreds of thousands of Syrian refugees, is expected to see some of the worst of the weather.

This persistent rain will clear into eastern Turkey during the day on Tuesday, increasingly turning into more wintry weather as it does so.

Even behind this band of rain, the weather will remain unsettled over the next few days with further heavy downpours possible.

As the system clears away, the weather will turn much cooler behind it. Many of the hundreds of thousands of people who live in tents on the Turkey-Syrian border will be subjected to below freezing temperatures at night. 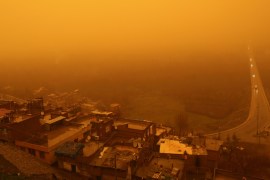 Winter storm sweeps across the Levant

Sandstorm, rain, snow and frost – it now feels like winter in the Middle East.