Journalist Aaron Cantu is among 59 defendants still facing the grim prospect of decades behind bars after being arrested at a protest during US President Donald Trump‘s inauguration last year.

On Friday afternoon, Cantu’s lawyers filed a motion to dismiss the charges against the reporter, arguing that moving forward with his prosecution would “set a dangerous precedent for journalists”, according to the filing.

“The indictment does not contain any specific allegations that Mr Cantu himself engaged in any violent or destructive acts,” the filing reads.

The prosecution’s case against Cantu is largely focused on his knowledge of the protest tactics and the fact that he remained in the area of the protesters while property damage took place.

“The most the indictment alleges is that Mr Cantu was present at the demonstration, followed along with it, and was wearing dark clothing – all of which are consistent with reporting on the Inauguration Day demonstration as a journalist,” the document reads.

“The government’s prosecution of Mr Cantu is the most severe type of government restriction possible,” it adds.

“The government is not simply trying to limit what Mr.Cantu publishes as a journalist, but to actually prosecute and imprison him for exercising his First Amendment newsgathering right.”

The motion comes a day after the US Attorney’s Office for the District of Columbia filed a motion to dismiss indictments for 129 of 188 defendants who were arrested during the anti-capitalist bloc protest on January 20, 2017.

In that court filing, the US Attorneys’ Office for DC said it would focus on the remaining 59 defendants by dropping the charges against 129 others.

“In so doing, the court, the government, and the [remaining 59] defendants can proceed more expeditiously with their trials,” wrote Jennifer Kerkhoff, the lead prosecutor, in the motion to dismiss.

More than 230 people – protesters, journalists, medics, legal observers and bystanders – were arrested and charged with felony rioting during the anti-capitalist bloc march on 20 January last year.

Twenty had their charges dropped, while an additional 20 have reached plea deals.

After the DC Superior Court returned a superseding indictment in April, more than 212 defendants were facing a swath of felony charges.

In December, a jury found the first batch of six defendants –  among them independent photojournalist Alexei Wood – not guilty on all counts.

At the time that the government decided to drop charges for 129 defendants, there were still 188 people with pending cases.

Cantu, who is now a staff reporter at the Santa Fe Reporter, was working on a freelance basis at the time of his arrest. He has published with Al Jazeera America, The Guardian, Vice and The Nation, among others.

Rights groups have also spoken out on behalf of the reporter.

“In Cantu’s case, the indictment shows that while he was close to the events, he did not participate in any violent actions,” The Reporters Committee for the Freedom of Press said in a July press release.

In November, Defending Rights & Dissent, The Nation Institute, Pen America, the Freedom of the Press Foundation and Free Press, among other watchdogs, sent a joint letter to the Department of Justice, urging that the charges against Cantu to be dismissed.

“Journalists have a responsibility to cover events that are of national importance, particularly political protests,” that letter stated.

“Threatening journalists with arrest both impedes their ability to do so and sends a chilling message to others attempting to cover political dissent.”

Although several journalists were arrested during the inauguration protest, most later had their charges dropped.

While supporters and defendants welcomed the government’s decision to drop charges for 129 people on Thursday, they urged the US Attorney’s Office for DC to dismiss the charges for the remaining defendants.

The US Attorney’s Office for DC’s filing on Thursday said the remaining defendants either participated in property destruction or violence, participated in planning the rally or demonstrated knowledge of and participation in black bloc, a tactic used to conceal the identities of protesters.

Describing the development as a “victory”, Sam Menefee-Libey of the DC Legal Posse, an activist group that supports the defendants, said all 59 remaining defendants “should definitely have their charges dropped”.

“The fight still continues and it’s important that we pay close attention to how the government continues to criminalise organising and continues to attempt to repress political dissent,” he told Al Jazeera.

“It’s clear that they’re still going after people who organised politically, also people who do lots of media work and folks who don’t necessarily fit the three categories they named,” he added.

“This is an incredibly broad prosecution, so it’s still important that we look at this as repression.”

Andy Switzer, one of the defendants whose charges were dropped on Thursday, described the dismissal as “a victory [which] means that more than 100 people no longer have serious felonies and decades in prison hanging over our heads”.

In a press release published by the Defend J20 Resistance activist group, Switzer said: “[W]e will continue to work together and fight the government’s attempts to stifle resistance.” 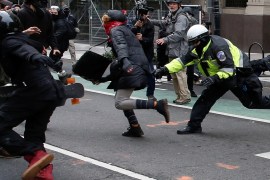 The government will pursue felony charges against 59 defendants, putting them at risk of decades in jail. 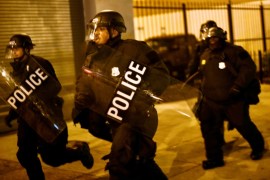 US J20 defendants: ‘Waiting is part of the punishment’

The first six people have been acquitted, but the 188 remaining Inauguration Day defendants have yet to go to trial.