On Monday, the United States celebrates the life and legacy of civil rights activist Martin Luther King Jr, who would have turned 89 years old.

Beginning in 1971, three years after he was assassinated in Memphis, Tennessee, many US cities and states began to mark what is now known as “MLK Day”.

More than 30 years later, the day is still traditionally celebrated as one of service, honouring King’s legacy and words, including his famous “I have a dream” speech, which continue to resonate today.

Here is a list of some of King’s most emblematic quotes:

In a letter from the Birmingham city jail in 1963, King wrote:

Injustice anywhere is a threat to justice everywhere.

On truth and love

In 1964, King received the Nobel Peace Prize for his non-violent fight against racial inequality. The Baptist minister, Nobel Laureate and civil rights activist dedicated his life to “work for peace, social justice, and opportunity for all Americans”.

In his acceptance speech he said:

I believe that unarmed truth and unconditional love will have the final word in reality.

The legacy of Coretta Scott King, the woman who stood by Martin Luther King Jr. pic.twitter.com/7GRaJOKyUJ

In 1947, King wrote for the Morehouse College Student Paper, The Maroon:

Intelligence plus character - that is the goal of true education.

On racism and violence

As reported by the Chronicle in 2008, in 1957 King delivered a speech in Finney Chapel in which he said:

King was the author of the book Strength To Love, a collection of sermons that he wrote on a number of topics, including religion.

In one of King’s sermons, he extolled the need for a “tough mind”. “The modern world”, he said, has far too much “softmindedness” of “unbelievable gullibility”.

King also had great appreciation and respect for science.

“True peace is not merely the absence of tension: it is the presence of justice,” Martin Luther King responded after being accused of disturbing the peace during the “bus boycott” in Montgomery, Alabama.

The bus boycott was a 13-month political and social protest against the policy of racial segregation on public transit.

It ended on December 20, 1956. The US Supreme Court ultimately ruled that segregation on public buses is unconstitutional.

True peace is not merely the absence of tension: it is the presence of justice. 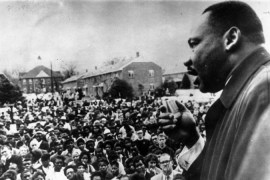 The ‘Letter from Birmingham Jail’ created the moral blueprint for the civil rights movement.