Palestinian leaders are set to hold a crucial summit in response to the US recognition of Jerusalem as Israel’s capital, but political movements Hamas and Islamic Jihad are boycotting the event, raising questions about unity as President Mahmoud Abbas ramps up the campaign for statehood.

Hamas had announced it would not participate in the Palestinian Liberation Organization (PLO) Central Council meeting on Sunday and Monday, saying it objected to Abbas’ decision to hold the meeting in the occupied West Bank.

“Hamas will not take part in the upcoming meeting,” Hussam Badran, a Hamas spokesman, said in a statement on Saturday, urging that it be held “outside the occupied Palestinian territories to escape from Israeli pressure”.

News of the Hamas boycott comes as Israel announced on Sunday the closure of Gaza’s only commercial border crossing of Karam Abu Salem, and Israeli warplanes bombed a site near the Rafah crossing.

On Sunday, the Israeli prime minister’s office confirmed the bombardment of the crossing that connects Gaza with Egypt.

Islamic Jihad had earlier announced that it would not participate in the meeting in Ramallah, and later urged the Palestinian National Council (PNC) – the highest decision-making body of the PLO – “to end relations” with the US, and accelerate internal reconciliation, the Palestinian news agency Wafa reported.

Hamas and Islamic Jihad are both based in Gaza, and the former governs the besieged Palestinian enclave. While both organisations are not part of the PLO, they are regularly invited to observe its meetings.

PNC head Saleem al-Zanoon will preside over the meeting of the Central Council, the second-highest Palestinian legislative body after the PNC.

In a statement posted on the PNC website on Saturday, Zanoon urged “unity” among all Palestinian factions, saying “the situation is very delicate and the challenges and risks are increasing.

“As long as Israel chose aggression and refused to recognise our rights and our state with Jerusalem as its capital, it is our right to reconsider and choose alternatives that will achieve our legitimate national goals,” he said.

He added that the council meeting will go ahead, saying he hopes the leaders will come up with resolutions “that protect our national rights in establishing our independent state with Jerusalem as its capital”.

Among the statements being considered by the PLO Central Council is the declaration of the areas liberated by Israel in 1967 as “a state under occupation”, according to Palestinian news agency Wafa, quoting Azzam al-Ahmad, a member of the Fatah Central Committee.

Other diplomatic actions are also being considered for the UN General Assembly, UN Security Council and the International Criminal Court.

“This is a council that has not had elections in two decades, and whose legitimacy, like the legitimacy of Mahmoud Abbas, went away a long time ago,” Buttu told Al Jazeera on Sunday.

“What they should be focused on is having elections, and creating a new council that is representative of people and their political views, rather than just holding a meeting, just for the sake of holding a meeting,” she added.

The boycott by Hamas also exposes conflicts with Fatah, the PLO’s political arm led by Abbas. In October last year, the two parties signed a reconciliation deal in the Egyptian capital, Cairo, as part of an effort to end a decade-long rift and present a united front for Palestinian statehood.

The agreement raised hopes that it would bring relief to the humanitarian situation in Gaza, made worse by the Israeli blockade. However, talks have since broken down.

On December 6, US President Donald Trump declared that he was formally recognising Jerusalem as the capital of Israel, igniting deadly protests in the Palestinian territories.

Palestinians said Trump’s decision “destroyed the possibility of peace”, and removed the US as a neutral broker of talks between Israelis and Palestinians.

East Jerusalem is considered by the Palestinians as the capital of the future Palestinian state. 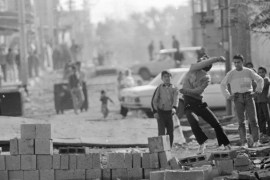 ‘Children of the stones’: the day Palestine was reborn

Thirty years ago today, Palestinians took the first step to reclaim their identity and stand up to their oppressors. 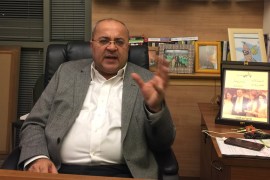 Ahmad Tibi: No deal for Palestine under Donald Trump 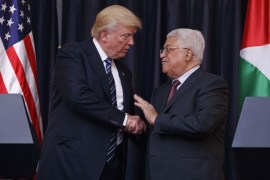 Analysts say withdrawing US money to Palestinian Authority may deprive US of influence on its leaders.