An Iranian mayor apologised for a billboard in his city that mistakenly featured Israeli soldiers while attempting to mark the Iran-Iraq war.

The billboard, which was installed in Shiraz, showed three male soldiers standing on a rocky outcrop next to a quote from a Persian epic poem, conservative online news agency Tasnim reported on Friday.

But the shot was actually a digitally altered picture of Israeli soldiers; a female soldier from the original photo had been cropped out.

The banner was pulled down from the southwestern city on Wednesday night and the mayor issued an apology the next day.

“This mistake of putting up such a despicable banner during the Sacred Defence Week is unforgivable,” Mayor Heydar Eskandarpour was quoted as saying.

Iran commonly refers to the brutal eight-year war with Iraq as “the sacred defence”. In recent days, the country has been marking the start of the conflict that began on September 22, 1980.

“In addition to apologising to Shiraz’s pious and noble people, I ask the authorities to investigate the roots of this suspicious act and promptly report to the people,” the mayor said.

Two public relation officials at the municipality were later fired on Thursday night, according to Fars news agency.

There were also reports that arrests were made in connection to the controversy, but Al Jazeera could not independently confirm the news.

Iranian social media was abuzz with heated reactions to the controversy.

“M16 guns, straps, clothes, helmets: all clearly belong to Zionists. The best I can say is that you did something idiotic,” wrote a Twitter user identified as @mhrezaa.

Another Iranian user @masoudasadi67 also called for the swift punishment of “those who committed such a heinous act”. 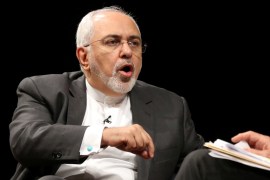 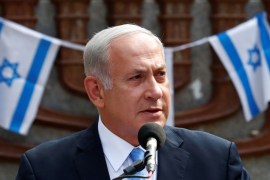 Recent deal between Damascus and Tehran on military cooperation will not deter Israel, Netanyahu vows.