A wildfire whipped by strong winds has forced dozens of people to evacuate part of a peninsula in southern Croatia as the army joined local efforts to fight the flames.

Authorities said the wind prevented firefighting planes from helping ground teams and pushed the fire toward the village of Mokalo on the Peljesac peninsula.

Croatian TV said about 40 residents and tourists staying in two camping areas had to evacuate.

Strong winds also disrupted ferry traffic between the Croatian islands, and on bridges and highways along the coastline.

Authorities say they are searching for a Mexican woman who went missing while surfing in rough seas near the island of Brac.

Tinder-dry conditions on the other side of the Adriatic Sea have caused similar problems in Italy. A huge forest fire which broke out in northern Tuscany on Monday night forced the evacuation of around 700 residents from their homes.

The blaze started around 21:00 GMT on Monday, and by Tuesday had already consumed 250 hectares of forest.

The fire, which broke out near Pisa was thought to be most critical near the towns of Calci, Montemagno, San Lorenzo, Zambra, Caprona and Noce.

By Tuesday daytime, it was said to be under control as firefighters and volunteers, assisted by two water-dropping planes, tackled the blaze.

Firefighting helicopters were unable to take off in the area due to strong winds.

While rain is not expected over the next few days, the winds are forecast to ease down so which should allow further progress to be made. 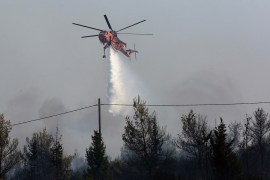 Wildfires around the globe

Hot, dry weather, particularly across Europe, has left many areas of forest and woodland vulnerable to fires. 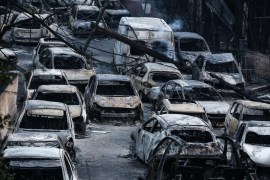 At least 79 people were killed after forest fires erupted in villages outside of Athens.