Russia and Turkey agreed on borders of the demilitarised zone around Syria’s Idlib, part of a deal aimed to prevent a military assault on the last rebel enclave, Russia’s top diplomat said.

Foreign Minister Sergey Lavrov made the announcement on Friday as his Turkish counterpart, Mevlut Cavusoglu, said he and Lavrov would meet Iranian Foreign Minister Javad Zarif in New York City next week to further discuss the situation in Syria.

“Just yesterday or the day before, the militaries of Russia and Turkey agreed the concrete frontiers of the demilitarised zone,” Lavrov told reporters during a visit to Sarajevo.

Moscow said the demilitarised zone would help stop attacks from Idlib on Syrian army positions and Russia’s military bases in the region.

On Monday, Russian President Vladimir Putin and Turkish President Recep Tayyip Erdogan agreed on the establishment of the 15-20km zone.

Security in the area will be overseen by Turkish contingents and Russian military police. The agreement will prevent military action against Idlib, Russia’s defence minister said.

“It’s an intermediate step … but a necessary step,” Lavrov said of the zone.

“By mid-October, all [fighters from Hay’et Tahrir al-Sham] must leave this demilitarised zone, and all heavy military equipment must be pulled out of there,” he said.

According to the diplomatic sources in Ankara, a coordinated feasibility study on the zone is being held by the Turkish and Russian military and intelligence officers. It is planned to be completed by September 30 and then presented to Putin and Erdogan.

Cavusoglu said he will join Lavrov and Zarif in a trilateral meeting on Syria in New York, on the sideline of the UN General Assembly meeting.

Russia and Iran are key allies of Syrian President Bashar al-Assad‘s regime, helping the Syrian government establish control over most of the country’s territory after intervening in the multifront conflict in 2015.

Turkey, however, backs opposition fighters seeking to overthrow the Syrian leader. It has said a large-scale offensive against the rebels could trigger a mass exodus towards its border.

Dr Oytun Orhan, coordinator of Syria studies at the Ankara based Center for Middle Eastern Studies, told Al Jazeera that Turkey might need to take military measures against fighter groups in case of a confrontation threat, particularly against formerly al-Qaeda-affiliated Hay’et Tahrir al-Sham (HTS). He said “especially foreign fighters within the HTS have the potential to sabotage the zone deal”.

In Idlib, protests continue in the rebel-held province calling on the international community to stop the bloodshed, while demanding the removal of Assad.

Syrian activist Alaa el-Ahmed told Al Jazeera there is a feeling among the opposition that they have been abandoned by the world.

“We are concerned because some countries are now moving closer to the regime. Europe and the US, for example, they have not taken any real stance against the crimes committed by the regime,” Ahmed said.

An estimated three million Syrians live in Idlib, half of them already displaced from cities and towns under state control.

Meanwhile, Jan Egeland, a UN humanitarian aid official for Syria, warned he still sees “great potential for a lot of fighting” in Idlib – despite the recent accord between Russia and Turkey.

Egeland said “it’s not over” and air raids and ground offensives are likely to continue against UN-listed “terrorist” groups whose fighters live near civilians.

Egeland said some armed groups were prepared to fight to the end and urged talks with them “to end the conflict without bloodshed for civilians”. 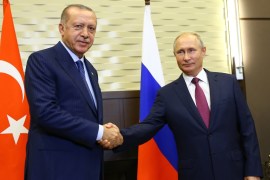 Turkey: Civilians to stay in Idlib, ‘terrorists’ to be removed 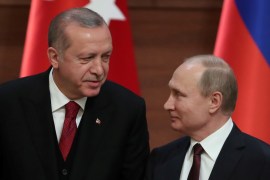 Erdogan, Putin to hold talks in Sochi over Idlib situation

Turkey’s president says he expects the meeting to have positive outcome to prevent humanitarian tragedy in Idlib.