Irish police said the body of a woman in her 50s was recovered on a beach in the village of Claddaghduff in the western county of Galway after her caravan fell from the cliff above.

Police said an engineer working for the Northern Ireland Water utility was killed in an incident involving a tree.

The storm caused severe damage across Northern Ireland and the Republic, as winds reached up to 225 kilometres per hour.

Alex Deakin from the UK Meteorological Office said Storm Ali brought the strongest wind gusts on record to Northern Ireland since 1880, at 146km/h.

It left 200,000 people without electricity and more than 50 flights in and out of Dublin were cancelled.

In Scotland, a cruise liner off the coast had to be rescued and people battled heavy rain and damaging winds as they tried to go about their daily tasks.

The worst weather has now moved away into Scandinavia but further spells of wet and windy weather are expected on Friday.

The UK Met Office also issued warnings for other wind storms across England and Wales on Sunday and into early Monday. 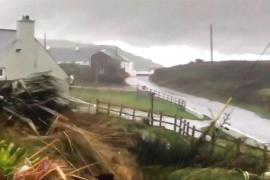 Three dead and 360,000 without power as Ophelia hits Ireland

At least three people have been killed by storm Ophelia in Ireland. It also left hundreds of thousands of houses and businesses without power. 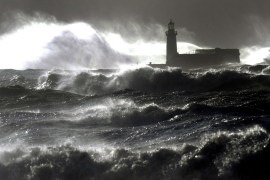 Abigail – the first named wind storm to hit the UK and Ireland – whips up hurricane-force gusts over Scottish Islands.