Zarif said the US leader “plans to abuse presidency of SC [Security Council] to divert a session – item devoted to Palestine for 70 yrs – to blame Iran for horrors US clients have unleashed across ME [Middle East],” Zarif wrote on Twitter on Wednesday.

He also wrote the hashtag #chutzpah to suggest Trump’s audacity.

Iran and the United States have been engaged in a diplomatic tug-of-war and harsh rhetoric since Trump came to office.

During his campaign for the presidency, Trump repeatedly referred to the historic 2015 nuclear agreement as the “worst deal” ever and vowed to tear it apart.

On Tuesday, US Ambassador to the UN Nikki Haley announced Trump would chair a UN Security Council meeting on Iran later this month to spotlight its “violations of international law” during the annual gathering of world leaders in New York City.

The US, which holds the council presidency for September, has unsuccessfully pushed it to call out Iran.

It is unclear whether Zarif or Iranian President Hassan Rouhani will be present at the Trump-chaired Security Council meeting. But Rouhani is expected to attend the annual UN General Assembly meeting.

Iran’s FM responds to @POTUS chairing a session of the #UNSC in September. Presumably (per @nikkihaley ’s remarks) Iran will be represented at the meeting by either @HassanRouhani or @JZarif. If so, will be the most electrifying event of #UNGA week. https://t.co/RWj5wvqbhE

Haley has regularly verbally attacked Iran, accusing it of meddling in the wars in Syria and Yemen.

She told reporters Trump was chairing the meeting “to address Iran’s violations of international law and the general instability Iran sows throughout the entire Middle East region”.

In May, Trump withdrew from the nuclear deal aimed at preventing Iran’s nuclear capabilities in return for lifting some sanctions.

Trump also ordered the reimposition in August of US sanctions suspended under the deal.

Since then, Iran has filed a case against the US before the UN’s International Court of Justice, demanding the sanctions be quashed.

Iran is still subject to a UN arms embargo and other restrictions contained in the resolution that enshrines the nuclear deal.

European powers have been scrambling to salvage the accord.

In February, Russia vetoed a US-led bid for the Security Council to call out Tehran for failing to prevent its weapons from falling into the hands of Yemen’s Houthi group, a charge Tehran denies. The issue of Iran’s support of the Houthis is not covered in the nuclear deal. 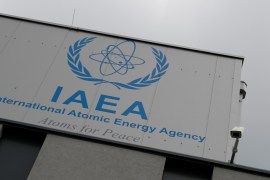 UN: Iran continues to comply with terms of 2015 nuclear deal

UN’s nuclear watchdog confirms Iranian compliance with 2015 nuclear deal amid uncertainty over future of the pact. 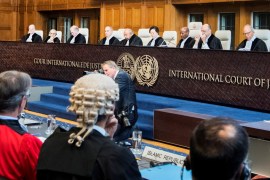 State Department lawyer argues her country has the right to protect its national security and other interests. 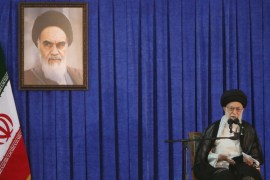 Iran’s supreme leader wants armed forces to be vigilant as fallout from US withdrawal from nuclear deal continues.