US President Donald Trump’s top national security adviser has said the relaxation of any sanctions against North Korea was not under consideration as Pyongyang has not taken the necessary steps to denuclearise.

In an interview with US cable channel, Fox News, John Bolton said on Tuesday that US Secretary of State Mike Pompeo is prepared to return to North Korea for another meeting with its leader, Kim Jong-un.

“What we really need is not more rhetoric,” he said. “What we need is performance from North Korea on denuclearisation.”

Bolton said the United States has lived up to the Singapore declaration that followed the June 12 summit between Trump and Kim.

“It’s just North Korea that has not taken the steps we feel are necessary to denuclearise,” he said.

Asked about the possibility of additional meetings, Bolton said Trump in a recent letter to Kim proposed sending Pompeo back to North Korea, and that Trump was ready to meet Kim any time.

The letter was handed to North Korean Foreign Minister Ri Yong-ho during a summit of Asian foreign ministers in Singapore over the weekend.

During that meeting, Ri complained that the US was acting with “alarming” impatience over the negotiations.

North Korea’s nuclear weapons programme has caused international tension for decades and the rhetoric and threats from Kim and Trump had been especially hostile before their June meeting.

Bolton said the “point may well come” when the Trump administration concludes that the North Korean leader is not serious about his promises to denuclearise.

Pressed on how long the US was prepared to wait – amid reports about North Korean plutonium production, missile work and sanctions violations — Bolton said that depended on a clear showing of North Korean will.

“If they make a strategic decision to give up nuclear weapons, they can do it within a year,” he said.

“We are waiting to see evidence that in fact that strategic decision has been made.”

Trump has touted his Singapore summit with Kim as a historic breakthrough towards the North’s denuclearisation. 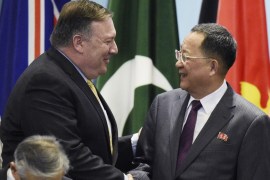 North Korean Foreign Minister Ri says Pyongyang unwilling to move unilaterally if US will not remove its ‘concerns’. 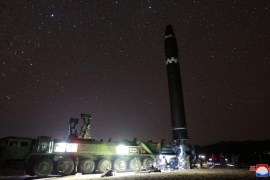 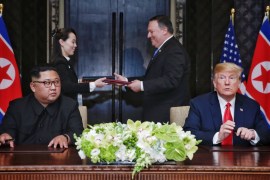 US president also says Russia has agreed to help with North Korea’s pledge to dismantle its nuclear weapons programme.