Less than 48 hours before renewed US sanction go into effect, the flag carrier of Iran has said that five new planes from the French-Italian firm ATR will soon arrive in Tehran as part of efforts to replenish the country’s ageing fleet.

“Based on existing agreements, five new ATR aircraft will land at Mehrabad Airport at 9am (04:30 GMT) tomorrow (Sunday),” Iran Air announced on Saturday on its Telegram channel.

The first round of US sanctions is set to snap back after a wind-down period expires on Monday, August 6.

While ATR is based in Europe, it also does business in the US, and is thus subject to the sanctions.

Years of US sanctions have prevented Iran from purchasing new jets, or even buying spare parts for those aircraft, and those restrictions have been partly blamed for the country’s extremely poor aviation record.

Those limits were only eased after the signing of the 2015 nuclear deal.

The new ATR-72600 planes are part of a deal for 20 new aircraft that Iran Air agreed to buy in April 2017, of which, eight have been delivered so far.

But the deal was thrown into doubt by US President Donald Trump‘s decision in May to withdraw from the agreement between Tehran and major powers, and reimpose sanctions.

The first phase of renewed sanctions includes blocks on financial transactions and imports of raw materials, as well as sanctions on Iran’s automotive sector, commercial aircraft purchases and even the carpet industry.

Remaining sanctions – including on Iran’s oil and gas sector and central bank – will resume in early November.

The twin-prop planes are jointly manufactured by France’s Airbus and Italy’s Leonardo, but because just over 10 percent of their parts are made in the US, they are subject to the renewed sanctions.

US company, Boeing, and Europe’s Airbus were also forced to cancel as much as $39bn in contracts with Iranian airlines, after Washington refused to issue them waivers. Of the 100 planes Iran ordered from Airbus, only three were delivered.

Iran said the sanctions are endangering lives by blocking the sale of new planes and spare parts for its ageing fleets.

Iran’s Aseman Airlines was ordered to ground its fleet of ATR planes in February after one of them crashed in the Zagros mountains, killing all 66 people onboard.

In an interview with Al Jazeera, Alex Macheras, an aviation analyst, said all of Iran’s 14 registered airlines have aging fleets “that are way beyond what they should be operating”.

“In the West, old aircraft … keep flying because they receive spare parts and constant maintenance. In Iran, maintenance is harder to give to aircraft given the lack of spare of parts – those spare parts have to adhere to the US Treasury licenses, as most of them have affiliation and links with the US.”

Macheras said that since 1979, over 2,000 Iranians have died in plane crashes, reflecting the “dire state of aviation” in the country.

With the return of the US sanctions, not only aircraft makers will lose “massive orders” from Iran, it also means that the country’s aviation industry will continue to deteriorate and be unable to join the global aviation industry, he said. 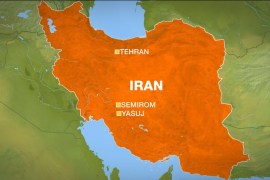 Twin-engine turboprop operated by Iran Aseman Airlines goes down near Semirom town while en route from Tehran to Yasuj. 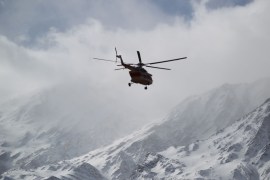 Iranian officials say they have located the site of a plane crash that killed all 65 people on board last week. 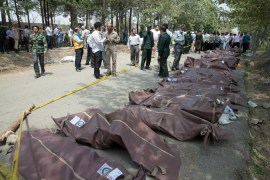