The heatwave across Japan has killed at least 80 people and resulted in the hospitalisation of more than 30,000.

Temperatures have eased over the last few days, with Tokyo seeing maximum temperatures falling back to the seasonal norm of 29C.

But another hazard is now facing the country: Typhoon Jongdari.

Jongdari is expected to graze the southern coastline of Honshu and hit Shikoku during the course of Saturday, from 18:00 GMT until Sunday at 00:00 GMT.

It will make landfall as the equivalent of a Category 2 hurricane on the five-point Saffir-Simpson scale. Sustained winds in excess of 150 km/h will cause damage and there is likely to be a storm surge that could cause some coastal inundation.

The rainfall from this system could cause problems to a country still recovering from a series of heavy rain events from late June to mid-July.

The heat is also expected to return from Monday, for at least a week, with temperatures rising to three to four degrees above average. 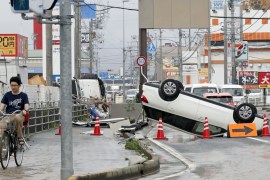 Tens of thousands left without drinking water and electricity, while thousands sleep in school gymnasiums. 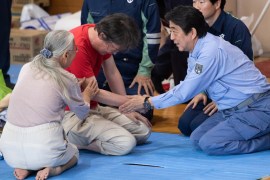 At least 20,000 remain stranded, while 225,000 households remain without water after deadly mudslides.