Iranian Foreign Minister Javad Zarif has called on European powers to implement economic measures to protect the 2015 nuclear deal before US sanctions against Tehran snap back between August and November.

Zarif made the statement on Friday after meeting in Vienna with foreign ministers from the remaining countries signatory to the international deal following the US’ unilateral withdrawal in May.

“Now we need to enter into the implementation stage,” Zarif, speaking in Persian, told reporters gathered at the Austrian capital.

“We all have in mind a timeframe that is dictated by US sanctions, meaning measures need to be carried out before the sanctions.”

Iran has threatened to withdraw from the deal, officially known as the Joint Comprehensive Plan of Action (JCPOA), if it does not receive enough economic guarantees from Europe.

Washington has threatened the JCPOA’s remaining signatories with punitive measures if they engaged in trade and investment with Tehran.

Without giving details, Zarif said European officials “provided more explanation” on how the guarantees will be implemented in some areas such as oil and banking issues.

The most punitive of the secondary US sanctions is expected to snap back in November.

Ahead of Friday’s meeting, French Foreign Minister Jean-Yves Le Drian said it was unlikely that Europe would be able to put together an economic package for Iran before November.

But Le Drian also warned Iran to “stop the threats” to withdraw from the deal if it does not receive enough guarantees from Europe.

German Foreign Minister Heiko Maas also said that world powers would not be able to fully compensate for companies who are abandoning their operations in Iran. Maas said more negotiations would be needed on the issue beyond Friday’s meeting in Vienna.

#Iran FM: Today all #JCPOA members showed commitment to stand against the measure of #US … Need to see how much they want & can in practice. What we heard today are practical methods & if political will shown today, is implemented in different levels, we can proceed w/o problem pic.twitter.com/ymMBLsED8k

Federica Mogherini, the European Union’s foreign policy chief, convened the crucial meeting with top diplomats from Germany, France, the United Kingdom, Russia, China and Iran, as well as the head of the UN nuclear watchdog, two months after President Donald Trump’s decision to pull the United States out of the deal.

The meeting lasted two hours until around 12:00 GMT on Friday at the same hotel where the deal was negotiated and signed in July 2015.

In a statement following the meeting, the joint commission on the nuclear deal did not say anything new, choosing instead to reconfirm their commitment “to the full and effective implementation” of the agreement.

Al Jazeera’s Jonah Hull, reporting from Vienna, said that in an ideal world the top diplomats would have come up with a package to keep the deal alive.

“It is easier said than done,” he said, adding that the Europeans alone “undoubtedly” do not have enough political means to protect the Iran deal from US pressure.

Zarif posted a statement on social media saying that his mandate at the meeting is to “forge practical solutions”.

Late on Thursday, Iranian President Hassan Rouhani had described as “disappointing” a package presented to him earlier by European countries.

“If we have hope of future, we’ll continue cooperation with Europe,” Rouhani said.

“Unfortunately, the proposed package lacked operational solution and specific method for cooperation, and featured just a set of general commitments like the previous statements by the European Union.”

Return of US sanctions

Under the 2015 deal signed in Vienna, Iran agreed to scale back its uranium enrichment programme.

In exchange, UN-approved sanctions were lifted, and Tehran was allowed to resume trading oil and gas on the international market. A total of $100bn in frozen Iranian assets was also released.

As an original signatory to the deal, the US – under then-President Barack Obama – also pledged to waive secondary American sanctions as long as Iran continued to abide by the agreement.

But Trump, a long-time critic of the deal who succeeded Obama last year, pulled out of the pact despite repeated assurances by UN inspectors that Iran is in compliance with its obligations.

Washington also imposed a series of additional sanctions on Iranian entities and individuals, as well as foreign companies in Iran, squeezing Iran economically.

The US also said that it would exert “maximum economic and diplomatic pressure” on other countries to stop buying crude oil from Iran.

With additional reporting by Ted Regencia in Doha, Qatar. 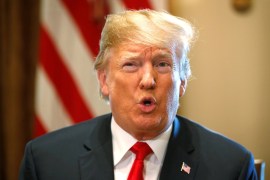 Is Donald Trump on a relentless quest to corner Iran?

US president accuses OPEC of manipulating oil prices and urges allies to produce more while he reimposes Iran sanctions. 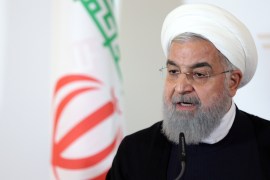 Rouhani says US unaware about consequences of Iran oil ban

Iranian President Hassan Rouhani says his country will stand firm against US threats, and will ‘survive’ sanctions. 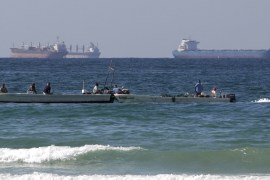 What’s at stake if trading at Strait of Hormuz is disrupted?

Iran hints that it could retaliate against US sanctions by disrupting trade at world’s busiest oil transit lane.