Residents of Tokyo are feeling the heat as temperatures soar across the city.

Temperatures on Monday jumped to a sticky 33 degrees Celsius and have remained high ever since.

Thursday was the fourth consecutive day that the thermometer rose over 30C, the first time that this has happened in June since 2005.

Japan Meteorological Agency advised people to drink plenty of water and replenish salts, which are lost from sweat. They also suggested using curtains to block direct sunlight and use air conditioners when necessary.

The temperature in Tokyo is expected to remain high, with a forecast of at least 31C until the middle of next week.

Thunderstorms are expected to rumble over the city from Tuesday, eventually pulling the temperature below 30C by Thursday.

While the heat remains in place over the capital, thunderstorms were already affecting other parts of Japan.

Torrential downpours in the early hours of Thursday morning caused major problems in central Honshu when a river burst its banks.

Part of the embankment of the Osaka River collapsed, sending mud hurtling down the hillside and making a major road impassable.

Some 81 local residents and hotel guests were cut off, unable to leave the area until an alternative route was opened up.

The rains also caused landslides in the city of Gero, which swept away a concrete bridge and water main.

The thunderstorms responsible for the landslides are currently spreading northwards. Saturday is looking particularly wet in South Korea. Flash flooding and landslips cannot be ruled out. 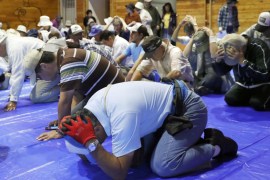 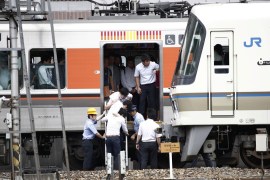 More than 200 injured by earthquake that struck during morning rush hour in Osaka Prefecture, officials say. 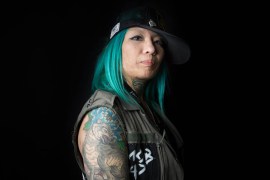 Japan: What my tattoo means to me

Japanese people explore their country’s historical and cultural relationship with tattoos and the controversy today.