Philippine President Rodrigo Duterte is entitled “not to believe in any faith” and express his views, his spokesman has said, addressing criticism following the 73-year-old leader’s recent commentary describing God as “stupid” and a “son of a whore”.

In an interview on Monday with the Philippine television GMA-7, Harry Roque said the remarks were an expression of the president’s “personal belief”.

He added that Duterte has his way of expressing his spirituality and what he said “does not need any interpretation”.

Roque said that the president’s tirade may be rooted on his own “unpleasant” experience with the church.

Duterte has said that as a child he was also a victim of sexual molestation by a Catholic priest.

‘What kind of religion is that?’

Duterte was addressing an information technology summit in his hometown of Davao on Friday when his speech veered towards religion and the Bible.

The president, who comes from a Catholic family, questioned the passage on creation in the Bible and the concept of “original sin”.

“Adam ate it (the fruit from the forbidden tree), then malice was born. Who is this stupid God? You are really a stupid son of a whore if that is the case,” Duterte said in Filipino and English.

“You created something perfect, and then you think of an event that would tempt and destroy the quality of your work. How can you rationalise a God … would you believe that?”

He also said that an infant should not have an original sin, as conception and intercourse only involve the parents.

“What kind of religion is that? That’s what I can’t accept,” he said as his audience sat awkwardly.

“It is the height of arrogance of power not only to disrespect and spit on an individual’s faith but also to act as though he is a god,” Trillanes said in a statement.

‘People can identify with him’

The Philippines is a predominantly Catholic country, with an estimated 79 percent of its 107 million population identifying themselves as Catholics. The rest belong to other Christian denominations, Islam and other religions.

Jeaneth Faller, dean of the Divinity School at Silliman University, said that while she supports the president personally, she believes Duterte should choose his words carefully.

“Everybody is listening. If your opinion is not good for the people, you should just keep it to yourself,” Faller told Al Jazeera.

At the same time, Faller said she is “not surprised” that despite Duterte’s controversial comments, he still enjoys support from his predominantly Christian followers.

“People can identify with him. He knows how to handle the people, he knows their language, he knows what they’re thinking. That is why he is very popular.”

But Faller also said that supporters should also be able to criticise the things Duterte is not doing right.

Since the 2016 presidential campaign, Duterte has clashed with the Catholic Church, a critic of his human rights records as mayor.

But Duterte said the church has no moral authority to criticise him, chastising the alleged cover-up of sexual abuse by clergy members.

During the campaign, Duterte also cursed at Pope Francis, whom he had referred to as “son of a whore”.

Faller said Duterte’s feud with the church also reflects a “split Christianity” in the Philippines, where people go to church, but “don’t care what the priest would say” about the president.

Elizabeth Angsioco, a Manila-based activist and political observer, said she agreed with the statement of Duterte’s spokesman that the president is entitled to his own opinion.

“However, I still believe that as president of the country, he must observe some form of decorum. If you don’t believe in God, you don’t have to insult those who have different views than you.”

Angsioco also noted that some of Duterte’s supporters have expressed their “disgust and displeasure” over the comment, even though they have “stayed quiet” about the ongoing killings during the government’s war on drugs.

“To me, that is inconsistent. Because if you are a Christian, I know that you believe in justice. I find it baffling,” she told Al Jazeera.

Meanwhile, Ana Santos, an international journalist and columnist based in Manila, told Al Jazeera that Duterte’s statements are meant to “gaslight us and divert our attention from important issues”.

“By now, the public should know that Duterte will not stop making comments that are more ludicrous than the previous one. We, the public need to refuse this diversionary tactic and demand that he speak and act on issues that are more urgent and pressing,” she said, pointing to the deadly drug war, inflation and the territorial dispute with China. 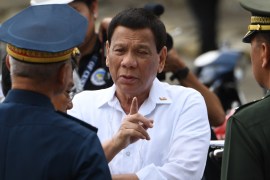 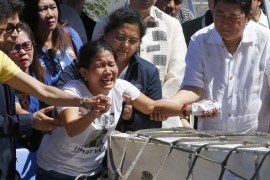 Why Duterte banned workers from going to Kuwait

Can the murder of a Filipino worker change the Philippines’ decades-old labour export policies? 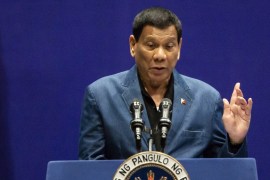