In the “intensive care unit”.

That’s how Abbas Araghchi, the Iranian deputy foreign minister, has described the state of the Iran nuclear deal, while also warning of a potential withdrawal “in the coming weeks” if Tehran does not secure sufficient financial guarantees from Europe.

Araghchi made the remarks on Friday in Vienna as the remaining signatories of the multinational deal – formally known as the Joint Comprehensive Plan of Action (JCPOA) – met in the Austrian capital to discuss the future of the 2015 agreement in the wake of the US’ decision last month to unilaterally pull out of it.

“I told the conference today that the JCPOA is in the intensive care unit because it has lost its balance as a result of the US withdrawal from the deal,” Araghchi was quoted as saying by Iran’s Mehr news agency.

Apart from the Iranian delegation, representatives from China, Russia, France, Britain, Germany and the European Union attended the Vienna meeting.

Among the guarantees that Araghchi demanded was that European companies in Iran be protected from US sanctions. He also asked that European crude oil transactions through Iranian banks must continue to operate “without any problems”.

“Iran is running out of its patience and there is a possibility for the country to leave the deal in the coming weeks,” the Islamic Republic News Agency also quoted Araghchi as saying.

His comments come amid growing questions whether European countries could protect the deal from US sanctions amid Washington’s threats to punish firms that continue dealing with Iran.

The US sanctions are expected to snap back in August and November. Washington also imposed a series of additional sanctions on Iranian entities and individuals, as well as foreign companies in Iran.

Under the 2015 deal signed in Vienna, Iran agreed to scale back the country’s uranium enrichment programme.

In exchange, UN-approved sanctions were lifted, and Tehran was allowed to resume trading oil and gas on the international market. A total of $100bn in frozen Iranian assets was also released.

As a signatory to the deal, the US – under then-President Barack Obama – also pledged to waive secondary American sanctions as long as Iran continues to abide by the agreement.

But Trump, a long-time critic of the deal who succeeded Obama last year, went ahead and pulled out of the pact despite repeated assurances by UN inspectors that Iran is in compliance with its obligations.

In the weeks following Trump’s decision, Europe has taken steps to defend the deal, including the reactivation of the 1996 “blocking statute” that shield European companies in Iran from being sanctioned by the US.

The EU has also authorised the European Investment Bank to facilitate European companies’ investments in Iran.

Still, following Trump’s declaration, several European companies, including the French energy giant Total, said that they were pulling out their investments from Iran, to avoid the secondary US sanctions.

Mohsen Milani, head of the Center for Strategic and Diplomatic Studies at University of South Florida, said the dilemma for governments in Europe is how to give Tehran “practical guarantees” that they will benefit from staying with the deal – even as European companies are backing away from investing in Iran.

“If they [Iranians] can get some of the guarantees, some of the protections they have asked for, they are going to stay” with the deal, Milani told Al Jazeera.

Given the short time until the scheduled reinstatement of US sanctions, European governments need to demonstrate that they are doing something “sufficient” for the Iranian leadership not to walk away, he said.

Holly Dagres, an Iranian-American analyst, noted that Germany is already taking steps to keep their companies from leaving Iran.

One of them has been the recent establishment of a specialised Iran sanctions office to address German companies’ fears of being penalised by the US Treasury, she told Al Jazeera.

But Arron Reza Merat, a UK-based Iran analyst, said considering the current political climate it is “not unlikely” that Iran will abandon the deal – and even withdraw from the nuclear Non-Proliferation Treaty (NPT), which it ratified in 1970.

“Iran has a limited number of options if diplomacy with the Europeans doesn’t work. Withdrawal from the NPT, the nuclear agreement and enrichment are cards they do have to play,” he told Al Jazeera.

Merat also said that the brewing dispute between US and its European allies over tariffs could make it more difficult for Europe to defy Trump on the issue of the Iran sanctions.

“The fact that America is putting trade restrictions for European steel in play reduces the chance of the Europeans defying America on the sanctions with Iran, unfortunately,” he said.

“I think Europe will use their compliance with US sanctions as a negotiating chip to get rid of the US tariffs on European steel.”

In Iran, the administration of President Hassan Rouhani is “trying its hardest” to remain in the nuclear deal to prove to the world that Tehran is abiding by the JCPOA, unlike the United States, Dagres, the Iran analyst, said.

But ultimately, Iran’s decision to stay or withdraw from the nuclear deal rests on Supreme Leader Ayatollah Ali Khamenei, she said.

“And his patience is running thin”. 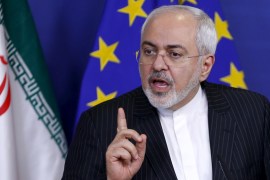 Iran’s top diplomat says Tehran cannot negotiate and entrust security of the Middle East to an ‘impulsive’ US leader. 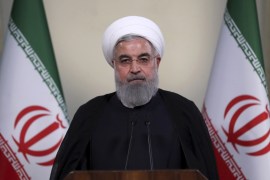 On Friday, Iranian President Hassan Rouhani heads to China for an economic and security summit in the city of Qingdao. 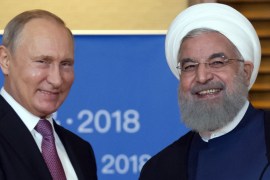 Will Russia benefit from a failed Iran nuclear deal?

Russia might benefit marginally from a collapsing Iran nuclear deal but it does not see it as a positive development.