Srinagar, Indian-administered Kashmir – Four Indian soldiers, including an officer, have been killed in cross-border firing in Kashmir‘s Samba district over two weeks after the South Asian countries pledged to curb cross-border violence.

The soldiers from the Border Security Force (BSF) were in their posts in Chambliyal sector when the firing began from across the border, S Rajinder Singh, the deputy commissioner of Samba, told Al Jazeera.

“The soldiers were killed by sniper firing. The firing started late on Tuesday and continued until wee hours on Wednesday,” he said, adding that three wounded soldiers were being treated at a local hospital in Samba – one of the most affected areas due to cross-border violence.

Last month, the militaries from India and Pakistan agreed to honour the 2003 ceasefire agreement in “letter and spirit”. That deal has largely held in the past decade despite tensions between the nuclear-armed rivals.

But the latest ceasefire pledge seems to have crumbled within days as both the countries accused each other of deadly attacks.

Residents said that “they had little hope as such attempts had failed in the past, too.”

“Last month, we thought maybe something will happen now. But it was like another failure that we have seen in the past. No one cares about the plight of border residents. We are forgotten people,” said a resident of Samba, who did not want to be identified.

“Yesterday, the shelling continued throughout the night. We are living in fear.”

Since 2015, cross-border violence has been growing. According to India’s Ministry of Home Affairs, 1,250 ceasefire violations have been recorded in the first five months of this year, compared with 971 such violations last year.

Thousands of people have been displaced from the villages near the Line of Control (LoC), the de facto border that separates the Indian and Pakistani-administered parts of Kashmir.

On Tuesday, Islamabad accused Indian forces of unprovoked ceasefire violations along the LoC in Chirikot sector, resulting in the killing of a civilian.

“The deliberate targeting of civilian populated areas is indeed deplorable and contrary to human dignity, international human rights and humanitarian laws. The ceasefire violations by India are a threat to regional peace and security and may lead to a strategic miscalculation,” Pakistan’s ministry of foreign affairs said in a statement.

The deadly cross-border hostilities between the two countries intensified since May 18 last month when four civilians and an Indian soldier were killed in RS Pura sector in Jammu region of the disputed state.

This is the second deadly incident this month after two soldiers, including an officer, were killed on June 2 in Jammu’s Akhnoor sector.

Kashmir continues to be a point of contention between India and Pakistan who have fought three wars over the region. Both claim the disputed territory in full but govern only parts of it. 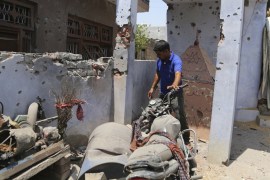 Civilians and troops killed on sixth day of shelling as Indian and Pakistan trade charges of initiating the violence. 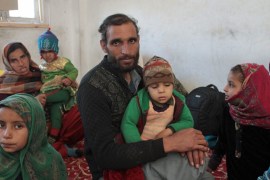 As fighting along the border between India and Pakistan rages, more than 1,000 Kashmiris flee the violence.