Shops and business centres remained closed for hours around the country in protest of the new law.

Members of more than 33 trade unions, along with numerous private-sector employees, took part in Wednesday’s strike.

The organisers accuse the government of covering up its failed economic policies through the introduction of new income tax legislation.

In the capital Amman, thousands of demonstrators gathered outside the Professional Associates Complex, where they called for the resignation of Prime Minister Hani al-Mulki’s government.

The proposed law will raise the tax rate on individuals up to 25 percent of their reported income and increase taxes on business and corporations.

According to Jordan’s Income and Sales Tax Department, however, the vast majority of citizens will not be affected by the legislation because of their low income.

The department’s spokesperson, Musa Al Tarawneh, told Al Jazeera that the main reason behind the new law was to curb tax evasion.

Economic analyst Mazen Irsheid said the proposed law would have a major negative effect on all economic segments of society especially the poor and the middle class.

“The government claim that the poor will not be affected by this law is inaccurate,” he told Al Jazeera.

“The new law will for example increase taxes on banks from 35 percent which is one of the highest in the world to 40 percent. The bank, in turn, would pass this increase to its customers.” He added

Under the law, the government will collect more taxes by reducing the salary exemption resulting in taxing wider pool of taxpayers.

The vast majority of taxes will be collected from those working in the private sector and independent professions.

The government hope the new law will bring in around $450m a year to the treasury and streamline its yearly collections.

Critics of the law argue that the government has already been taxing Jordanians in many other ways by imposing a high 16 percent sales tax on goods and services and sharply raising the prices of bread, fuel, electricity and other commodities.

Earlier this year, the government imposed a 50-100 percent tax increase on key food staples in an effort to decrease its $700m budget deficit.

According to Carnegie Middle East Center, the current Jordanian government of Prime Minister Hani al-Mulki has slowed down Jordan’s economic slide not by implementing cuts on government spending, but by imposing more taxes.

Jordan’s political model has historically been dependent on foreign aid, which explains its under-taxed system of government. However, that model, critics point out, has led to corruption and lack of accountability.

According to the World Bank, Jordan’s poverty rate is rising due to increase in inflation rate.

Critics also point out that the leading cause of mistrust of the government is lack of transparency and its failure to show its seriousness in combating corruption within its ranks, or bringing corrupt officials to court, which is costing the country billions of dollars. 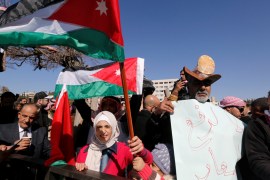 Anger simmers after the government hiked taxes between 50-100 percent on key food staples such as bread. 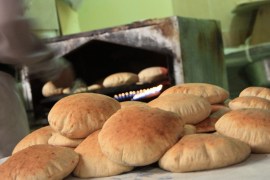