Taliban fighters attacked the western Afghan city of Farah from multiple directions in an ongoing battle to seize the provincial capital.

Attackers overran several security checkpoints in the city, and heavy fighting was under way on Tuesday, provincial official Fared Bakhtawer said. He said casualties were high but couldn’t provide a precise number.

“Security checkpoints around the city have collapsed into the hands of the Taliban, causing high casualties among security forces,” Bakhtawer said.

NATO said in a statement that A-10 fighter jets were circling Farah.

Samihullah Samim, a legislator from Farah, said parts of the city are under Taliban control, with heavy fighting just 300 metres from the governor’s residence.

If the Taliban gain a foothold, then fighters from neighbouring provinces would flood into the city, he warned.

However, interior ministry spokesman Najib Danish downplayed the seriousness of the attack. He said at least six security forces were killed and 12 others, including the deputy provincial police chief, were wounded in the fighting.

He said commando units and other reinforcements had been deployed. “There is no danger of Farah city collapsing into the hands of Taliban,” said Danish.

A Taliban spokesman, Zabihullah Mujahid, claimed responsibility for the attack, saying fighters came in from different directions and quickly overran multiple of checkpoints.

People living in Farah hid in their homes, leaving shops, government offices and schools closed for the time being, local media reported.

“Even ordinary citizens were aware of the Taliban gradually taking over more areas and becoming a formidable force in the province,” he said.

He accused the government and military leadership of “turning a blind eye” until the Taliban actually entered the city.

The Taliban have seized control of districts across the country, and Afghan troops and police nationwide have struggled to cope with unrelenting attacks in recent years.

The militia and Islamic State of Iraq and the Levant (ISIL) have carried out attacks in the Afghan capital, Kabul, killing scores of people in recent months. 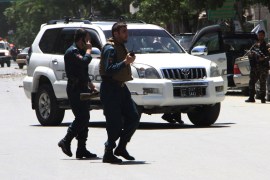 Eight suicide bombers took part in attacks on two police stations, one claimed by ISIL and the other by Taliban.