Dhaka, Bangladesh – Thousands of university students in Bangladesh are boycotting classes as part of a nationwide protest, with demonstrators blocking the main thoroughfare in the capital, Dhaka, on Monday, calling for the abolition of the quota system in government jobs.

The latest protest comes a month after Bangladesh Prime Minister Sheikh Hasina announced the abolition of the country’s decades-old quota system used in the recruitment of civil servants, but no concrete steps were taken to cancel it.

Muhammad Rashed Khan, joint convener of “Council to Protect Bangladesh’s General Students Rights” told Al Jazeera that they had been holding peaceful demonstrations since the announcement made by the prime minister.

“Thirty-two days have passed, but no gazette notification in this regard has been published yet. We have no option but to be on the streets again,” said Khan.

He led a procession of around 3,000 protesters at Dhaka University on Monday, suspending all classes and tutorials.

At Chittagong University, about 1,000 protesting students have been staging a sit-in on the rail tracks. No trains have left the port city for the campus since morning.

“Unless a gazette notification is issued about quota abolishment, we will not leave streets and will launch a tougher movement,” said Khan.

Under the quota system, 56 percent of the nearly 3,000 government positions – which are filled through annual examination – are assigned under various quotas, leaving only 44 percent of spots for general category students.

About 50,000 students from all 38 public universities and around 50 of the 96 private universities protested for three days straight in April, forcing Prime Minister Hasina to promise the abolition of the quota system.

On May 8, a day after the deadline set by students, Cabinet Secretary Mohammad Shafiul Alam said, “There’s no progress in cancelling quota system.”

The announcement re-ignited the protest again. On May 9, students at Dhaka University formed a 1,200 strong human chain and set May 11 as the new deadline to issue a gazette notification.

Meanwhile, Cabinet Secretary Alam told the media on Monday that the paperwork dealing with this issue had been forwarded to the Prime Minister’s Office. “The issue of quota is under process; a decision will be made soon,” he said.

Since February, students have been agitating to demand the reduction of the total quota spots from the current 56 percent to 10 percent.

They say this would create a level playing field while protecting the rights of candidates from minority groups, who would still benefit from the quota system.

The movement was initially led by students of Dhaka University in the capital but spread to other universities across the country.

Abir Raihan had participated in April protests in Dhaka, braving tear-gas and rubber bullets from police, only to find himself there again on Monday for the same cause.

“The prime minister herself declared there will be no quota in government jobs; why there is no gazette notification on that till now?” asked Raihan, a third-year student at Dhaka University.

A legacy of the British colonial rulers, competitive exams to recruit government officials are prevalent across the sub-continent, including India and Pakistan. After its liberation from Pakistan in 1971, Bangladesh formed its own Public Service Commission, which has been conducting the Bangladesh Civil Service exam to recruit civil servants since 1972.

Each year, a little over half of the 220,000-odd university graduates in Bangladesh take this examination and compete for 2,400 to 3,000 posts in various government offices, which are considered among the most “prestigious and lucrative” jobs in the country.

Of the 56 percent reserved positions, the biggest quota, 30 percent, is for the children and grandchildren of freedom fighters while 10 percent is for women and another 10 percent for people from underdeveloped areas, while members of indigenous communities get five percent. People with disabilities get the remaining one percent.

The student movement, which started off with peaceful protests near Dhaka University in mid-February, took on a more organised form with the help of social media campaigns.

This had the desired effect. On April 9, a large crowd of students occupied Shahbagh intersection in Dhaka, disrupting traffic across the capital. The protest escalated as police used tear gas and rubber bullets against the students, leaving over 100 of them injured.

News of the police’s actions spread through the media and on social media. By noon on April 10, the protests spread across the country, with students in the major cities, including Chittagong, Khulna, Rajshahi, Barisal, Rangpur, Sylhet and Savar boycotting classes in solidarity with the protesters.

Prime Minister Hasina was forced to concede to the demands. “There is no need for quota system in the public service,” she told parliament on April 11.

“Go back home. As you don’t want it, the quota system will be scrapped.”

Bangladesh has one of the highest “graduate unemployment rates” in the South Asia region. According to a 2014 report by the Economist Intelligence Unit, five out of every 10 graduates are unemployed (compared to three out of 10 in India and Pakistan).

Despite the high unemployment rate, posts in government offices often remain vacant as a result of the government’s inability to find suitable candidates under the various quotas.

Data maintained by his ministry put the number of approved government posts at 17,10,704 while incumbents numbered only 13,51,704.

Under these circumstances, the student protests for quota reforms are reasonable and justified, said Dr Musleh Uddin Ahmed, professor in the Department of Public Administration at Dhaka University.

He said most of these vacant posts could have been filled if a “large number of civil servants were recruited based on merit instead of the quota”.

Ahmed was also critical of the 30 percent quota for children and grandchildren of freedom fighters.

Giving grounds for such criticism, the Public Service Commission’s data reveals that in the 31st, 32nd and 33rd Bangladesh Civil Service exams (between 2012 and 2014), 63, 37 and 84 percent of posts respectively under the freedom fighter quota remained vacant.

The vacancies may have something to do with the fact that since the 1971 war, the list containing the names of freedom fighters in Bangladesh has been changed six times under various governments.

Commentators say that with the lack of transparency in the process of listing freedom fighters, the list itself has become questionable. There have also been instances when the freedom fighter certificates of high-ranking government officials turned out to be false upon verification.

“Freedom fighters are the best sons and daughters of our country, and I think their debt is unpayable,” said Ahmed.

“But after 47 years of independence, reserving seats in a merit-based public service examination for the children of freedom fighters doesn’t make much sense. There are many other ways to honour our freedom fighters,” he added.

“There are many meritorious students who now feel reluctant in even preparing for the exam as they believe fighting for less than half of the seats in the examination is not worthwhile,” he said.

“Some portion of quota, however, should be kept for the ethnic minorities; otherwise their right to equal opportunity will not be ensured,” Khan said. 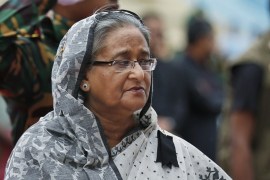 Is Bangladesh moving towards one-party state?

The controversial jailing of ex-PM Zia and persecution of dissent raises fears months ahead of general elections. 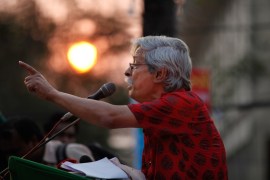 The stabbing has brought back memories of a series of fatal attacks against secular bloggers that occurred in 2015.