The Philippines is “confident” that the missiles China recently deployed in the South China Sea, including in one reef declared by a tribunal in The Hague as part of Filipino territory, are not directed at Manila, a spokesman of President Rodrigo Duterte has said.

“With our recently developed close relationship and friendship with China, we are confident that those missiles are not directed at us,” Harry Roque said on Friday, in a statement described by critics as the “weakest possible response”.

The Mischief Reef, one of the areas where the missiles were deployed, was declared in 2016 as being part of the Philippine territory by the United Nations-backed international tribunal at The Hague.

This reef is one of the seven areas in the South China Sea that was reclaimed by China. In February, it was reported that China has transformed those reefs into artificial island fortresses with multiple naval and air facilities, including runways and helipads.

The reefs are part of the Spratlys group of islands. At least six countries, including China and the Philippines, have competing claims over Spratlys.

“The relevant deployment targets no one. Anyone with no invasive intention will find no reason to worry about this. We hope that the relevant party could view this matter in an objective and calm way.”

“We will continue to work with all countries to maintain peace and stability in the South China Sea,” she added.

On Friday, Duterte’s spokesman Roque said Manila “would explore all diplomatic means to address this issue”.

Since becoming president of the Philippines in June 2016, Duterte has been eager to repair relations with Beijing.

During his visit to China in October 2016, Duterte declared he had “realigned” himself with China’s “ideological flow”.

In exchange, China promised Duterte there would be no further expansion in other reefs, and committed to pouring billions of dollars in loans and investments into the Philippines.

Duterte also said that China had already started building its installations in the Spratlys during the time of his predecessor, and that the Philippines’ closest ally, the United States, did nothing to stop it.

Filipino critics of Duterte, however, said that he has abdicated his responsibility to defend the sovereignty of the country by not acting on Chinese “incursions”.

Florin Hilbay, the former government lawyer who argued the case against China at The Hague, said that the government’s response to the recent missile deployments “is the weakest possible statement”.

“None of our allies and neighbours will respect us for this,” he wrote on Facebook.

In a statement, Gary Alejano, an opposition member of Congress, said the actions of China “are obviously threats to our national security”.

“Let us not let China’s sweet talks of investments and loans lull us into a false sense of security. Their actions clearly belie their pronouncements.”

Sung Kim, the US ambassador to the Philippines, also told reporters in Manila that China’s latest moves “suggest that they are moving toward militarisation”, according to the Philippine Daily Inquirer.

“We are concerned anytime a claimant, including China, takes an aggressive unilateral action toward militarisation,” he said. 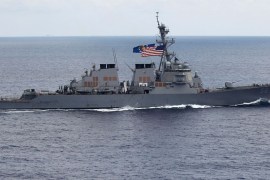