At least 29 people, including nine journalists, have been killed and dozens wounded after two explosions hit Kabul, according to Afghan health officials.

The blasts went off during rush hour on Monday morning in the Shash Darak area of the Afghan capital.

In the first explosion, a motorcycle-riding attacker detonated himself close to the National Directorate of Security (NDS), the main Afghan intelligence agency, TOLOnews quoted an interior ministry spokesman as saying.

In the explosion that followed about half an hour later, a second suicide bomber targeted emergency medical workers and journalists who had arrived near the scene of the first blast.

Al Jazeera’s Glasse said the second suicide bomber was posing as a journalist.

The Afghan Journalists Safety Committee reported that nine journalists who rushed to cover the aftermath of the first explosion were killed in the second blast.

A spokesperson for the Afghan health ministry said the two attacks killed at least 29 people and wounded 49 others, according to TOLOnews.

TOLOnews also reported that its cameraman, Yar Mohammad Tokhi, who had worked for the company for 12 years, was among those who were killed in the attack.

#UPDATE Agence France-Presse's chief photographer in Kabul, Shah Marai, has been killed.
He died in a blast that was targeting a group of journalists who had rushed to the scene of a suicide attack in the Afghan capital pic.twitter.com/rOa4rg24x9

We have lost two of our staff members in today's suicide bombing in #Kabul. Our reporter Ghazi Rasooli and cameraman Nowroz Ali Rajabi were covering an earlier suicide blast when they lost their lives. pic.twitter.com/Nnd8jGvIAB

As was two staff members of Azadi Radio, the Dari language service of Radio Free Europe.

An Al Jazeera photographer, Seyyed Nasser Hashemi, was also hurt in the incident. He is currently in the hospital recovering from his injuries, Al Jazeera’s Glasse said.

TOLOnews also reported that two other journalists were wounded in the second blast.

The death of the nine journalists is considered as the worst attack on Afghan media in modern history, Glasse said.

“It’s a very grim morning here,” she said describing the situation in the Afghan capital.

She added that there are many fortified streets near the site of the attack.

“There’s a lot of security in that area – it’s not far from NATO headquarters – and security has been beefed up around the Afghan capital, but clearly they haven’t been able to stop these kinds of attacks.”

The explosions on Monday come just a week after a blast hit a voter registration centre in Kabul, killing at least 57 people and wounding more than 100 others.

Separately, at least 11 Afghan schoolchildren were killed in Kandahar province on Monday when a suicide car bomber hit a convoy of Romanian troops patrolling the area as part of the NATO force.

Attacks have multiplied in recent days in advance of the long-delayed parliamentary and district council elections scheduled for October 20 this year.

“The series of attacks here in Kabul have made the Afghan capital most dangerous place in Afghanistan to be,” Al Jazeera’s Glasse said. 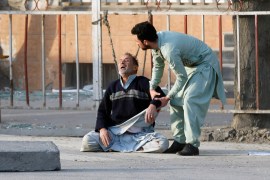 The Taliban claimed responsibility for Saturday’s assault, the third major attack in the past seven days. 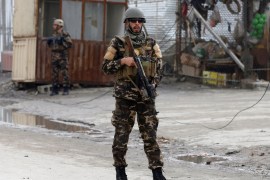 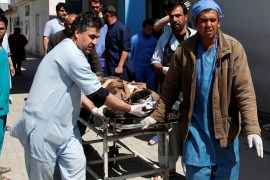 At least 29 people killed, 52 others wounded when suicide bomber detonated himself in a crowded area in Afghan capital.