North Korean state media has hailed as a “new milestone” the historic meeting between its leader and South Korea’s president, and their joint declaration to formally end the Korean War, and make the peninsula nuclear-free.

KCNA also said the summit paves the way for “a new era of peace and prosperity”.

On Friday, the leaders of the two Koreas signed a joint statement after an historic summit that saw Kim Jong-un become the first North Korean leader to step into South Korea since the end of the Korean War in 1953.

The peace talks were held in Panmunjom village along the demilitarised zone.

At the White House, US President Donald Trump said he hopes to build on the success of the meeting, with his own summit with Kim in late May or early June.

“I think the responsibility has fallen on the shoulders of the president of the United States. I think I have a responsibility to see if I can do it,” he told reporters.

“This is beyond the United States. This is a world problem. And it is something I hope I am able to do for the world.”

The Trump administration, however, maintains a meeting with the US and North Korean leaders will not occur unless concrete moves towards denuclearisation are clearly demonstrated.

But in recent days, Trump has significantly toned down his rhetoric against Kim, whom he once called “little rocket man”.

Now, he has referred to him as “very open” and “very honourable”.

United Nations Secretary-General Antonio Guterres also praised the meeting, saying “many around the world were moved by the powerful imagery of the two leaders coming together to advance harmony and peace on the Korean Peninsula”.

China’s foreign ministry also issued a statement saying it hoped all parties could maintain the momentum for dialogue and jointly promote the resolution process.

They also promised to pursue the end of nuclear weapons, although the statement did not include specific measures or a timetable.

Despite the widespread praise of the summit, questions remain as to North Korea’s willingness to forgo of its nuclear arsenal, which Pyongyang considers as a “treasured sword of justice”, wrote journalist Song Sang-ho in the Yonhap website.

Song pointed out that Pyongyang has even codified its “nuclear power status” in its constitution and other government documents.

“Friday’s inter-Korean summit declaration that included the phrase of ‘complete denuclearisation’ raised cautious optimism that Pyongyang could reorient its nuclear policy, but questions remain over whether it will bargain away its nukes.”

Speaking to Al Jazeera from Seoul, Robert Kelly, a Korea expert at Pusan National University, said the summit was a “good start”.

“It is certainly not where we were six months ago when we were talking about nuclear war,” Kelly said.

“I think the real question going forward is whether the North Koreans actually do what they said they would do yesterday,” he said.

He pointed out that in the past declarations and promises collapsed because there were “no follow through”.

“And that’s where ultimately North Korea has to move. There has got to be some concessions from North Korea, or we are going to be back where we were a year ago,” Kelly said. 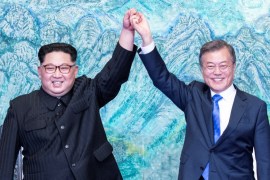 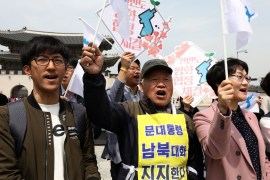 Inter-Korea summit: What do Koreans think?

Residents from both sides of the border share thoughts on the first talks between leaders of both Koreas since 2007. 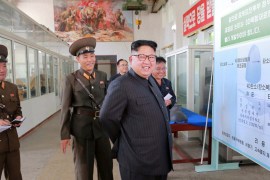 Researcher tells Hong Kong-based daily collapse of Mount Mantap site may be reason for the North’s suspension of tests.