Inspectors from the global chemical weapons watchdog have reached a second location in the Syrian town of Douma, where a suspected gas attack took place in early April.

In a statement issued on Wednesday, the Organisation for the Prohibition of Chemical Weapons (OPCW) said its fact-finding mission had collected samples from the location, which it did not identify.

OPWC said those samples and other materials gathered from the site would be brought to The Hague in the Netherlands for testing and analysis.

“They will be split and dispatched for analysis by the OPCW designated labs.”

The statement said inspectors would continue with their fact-finding mission based on interviews with relevant people and analysis of samples. The team did not say how long the inspections would take.

Representatives of the OPCW arrived in Syria on the second week of April but were only allowed to visit Douma starting last Saturday, April 21.

The delay of the inspections raised questions about whether there would still be enough evidence left for the investigators to gather.

The United States and France accused Russia of blocking access to the site, where rescuers and medics said dozens of people were killed on April 7.

The Syrian government and Moscow say the alleged chemical attack, which prompted a series of air strikes by Western allies as an act of retaliation, was staged.

They also contend that the US-led air attacks only delayed the deployment the inspectors to Douma.

Initially, the OPCW team deployed to Douma had not been able to enter the site because of security concerns.

The UN Department of Safety and Security (UNDSS) officials had to withdraw from the first location as the presence of large crowd there raised security fears.

At the second site, they came under small arms fire, and an explosive device was detonated nearby.

The town of Douma was under rebel control and facing a government air and ground assault when the suspected attack took place.

Images that emerged from Douma at the time showed lifeless bodies collapsed in crowded rooms, some with foam around their noses and mouths.

Opposition groups gave up the town in the days after the incident. Thousands of people – rebels and civilians – left on buses to northern Syria, believing they could not reconcile with the government after it took over the town.

The Syrian war has been going on for more than seven years. 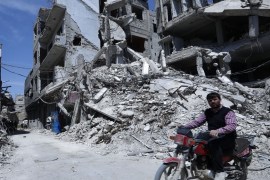 A week after arriving in Syria, experts enter town where dozens died and hundreds were injured in April 7 incident. 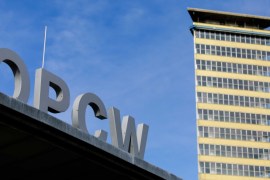 Watchdog says any deployment will have to receive security clearance, a day after UN team comes under fire in Douma.