In a rare diplomatic gambit, the two agreed to hold talks on restoring ties, which had been crippled for years following the Iran-Iraq War and the deaths of hundreds of Iranians during the 1987 Hajj pilgrimage in Mecca.

Rafsanjani dispatched Iran’s ambassador to Germany, Seyed Hossein Mousavian, to negotiate with the Saudi crown prince, who would later on become king.

After an initial meeting in the Moroccan city of Casablanca, Mousavian travelled to Riyadh for more rounds of talks with Abdullah at his private residence.

Three nights of intense negotiations, covering issues on regional security and bilateral relations, produced a deal that paved the way to a period of detente.

Recalling his 1996 meeting with King Fahd, Mousavian told Al Jazeera the Saudi monarch was “happy to build bilateral relations” with Iran, but was “very disappointed” that Iraq could not join the alliance, in the aftermath of the first Gulf War.

“The accords secured amicable ties between Iran and Saudi Arabia for the next decade,” Mousavian said, pointing to increased cooperation in security and trade between the regional rivals.

In 1997, Tehran had rolled out the red carpet for a visit by Crown Prince Abdullah.

By 1998, Rafsanjani was scooping water from the garden oasis of Fadak, a venerated site for Shia Muslims outside Medina, becoming the most senior Iranian leader to visit Saudi Arabia since the 1979 Islamic Revolution. He was accompanied by his senior national security adviser, Hassan Rouhani, the future president.

The visit paved the way for even closer ties, including trips by senior Iranian leaders to Saudi Arabia and the breakthrough 2001 security pact on “terrorism” and drug trafficking.

Tehran-based journalist Rohollah Faghihi, who interviewed Rafsanjani in 2015, told Al Jazeera that the late president spoke fondly of his ties with Saudi leaders, and still expressed hopes for diplomatic revival between the two countries until his death in 2017.

Nearly three decades since that fateful meeting in the Senegal capital in 1991, Iran and Saudi Arabia find themselves on the opposite sides of a gaping regional geopolitical chasm – from the war in Yemen and the tensions in Iraq, Bahrain and Lebanon, to the ongoing conflict in Syria.

Analysts say the ongoing war of words between Tehran and Riyadh portends more hostilities, with no diplomatic solutions in sight.

At the Arab League Summit in Riyadh on Sunday, Saudi Arabia led the condemnation of what it called Iran’s “blatant interference” in the internal affairs of Arab countries.

The “warm era” between Iran and Saudi Arabia started to turn cold following the 2003 US invasion of Iraq, says Mousavian, now a senior scholar at Princeton University in the US.

That suspicion became reality when the US invasion thrust Iraq into the Iranian sphere of influence, leaving its own ally, Saudi Arabia, feeling vulnerable.

Even then, King Abdullah continued to maintain contact with the Iranians, welcoming then-President Mahmoud Ahmadinejad for a state visit in 2007. And despite the Shia-Sunni tensions in Bahrain in 2011, Ahmadinejad made another trip to Riyadh in 2012.

In 2015, Abdullah died and Saudi Arabia saw a transfer of power to his half-brother, Salman bin Abdulaziz Al Saud, whose ascent to the throne marked the beginning of a more confrontational relationship with Tehran. In the same year, Iran signed a nuclear deal with world powers.

Obama’s departure and the arrival of his predecessor, Donald Trump, in 2017, however, provided Riyadh to regain its footing as the dominant power in the Middle East, Zweiri told Al Jazeera.

As president, Trump made his first foreign trip to Saudi Arabia. he has also threatened to abandon the Iran nuclear deal and appointed known Iran hawks in his cabinet.

“They [Saudis] want to see a diplomatic and political defeat of Iran as long as the Republicans are in power,” Zweiri says.

“They want to show that Iran is isolated, marginalised and facing pressure.”

However, Saudi Arabia does not want Iran completely “out of the game”, because its presence gives Riyadh’s new leaders “legitimacy”, Zweiri says.

“They want to show that there is a threat, and this can be used for both external and internal purposes”, including a military build-up.

Writing in The New Arab website in March, Rami G Khouri, a public policy fellow at the American University of Beirut, said part of the problem is that Iran has failed to match its “rosy rhetoric” with its action across the Middle East.

He said that amid Iran’s promise of detente, many Arab countries wonder, “what Iranian troops, funds, weapons, surrogates, technology … are doing in several Arab states”.

Saudi Arabia’s intervention in Yemen at the head of a coalition in March 2015, the deaths of hundreds of Iranian pilgrims during the Hajj of 2015 and the execution of Shia leader Sheikh Nimr al-Nimr in 2016, put more hurdles in its relationship with Iran.

In the aftermath of Nimr’s execution, Iranians attacked the Saudi embassy in Tehran, leading to the latest rupture in their diplomatic ties.

“Tensions between Iran and Saudi Arabia have reached such a point that prospects for dialogue, much less a diplomatic breakthrough, are extremely dim,” says Sina Toossi, an Iran expert at Princeton University’s Woodrow Wilson School.

Toossi says the rhetoric of the Saudi leadership, including MBS and Adel al-Jubeir, the foreign minister, “reflects a zero-sum view of Iran and its regional role”.

Both MBS and Jubeir have said Iran is to blame for most of the conflicts in the region, and described Tehran as a “state-sponsor of terrorism”.

“Saudi leaders feel they are the last Arab country standing in the way of total Iranian regional dominance. Thus, they believe any engagement will be tantamount to acquiescence of Iran’s regional status and role,” Toossi told Al Jazeera.

He said efforts by Iran’s President Rouhani and his foreign minister, Javad Zarif, to reach out to Riyadh have been rebuffed.

In 2013, Rouhani made overtures to Saudi Arabia for a dialogue. In October 2017, Zarif outlined a “win-win” solution in a piece in the American magazine, The Atlantic.

He also declared in January of this year that Iran is willing to sign a “non-aggression treaty” with its neighbours.

Toossi says the Iranian public remain “strongly supportive” of diplomacy, pointing to Rouhani’s re-election in 2017 as indicative of popular support of his pragmatic foreign policy.

But Zweiri, of Qatar University, says Rouhani is perceived as hostile by some of his Arab neighbours.

Similarly, MBS is proving true through his decisions in the region Iran’s claim that he is “politically immature”, according to Zweiri.

‘Looking for an interlocutor’

Esfandyar Batmanghelidj, an expert on Iran business diplomacy and founder of Bourse Bazaar website, says Saudi Arabia has the edge in the current “war of words”.

“I attribute it mostly to the fact that the battlefield of communications is where Saudi Arabia has, by far, the greatest advantage over Iran,” he told Al Jazeera.

He said MBS’s recent trip to the US “clearly demonstrates the immense access” of the Saudi government to the most influential figures in American business, media, and politics.

Batmanghelidj says as long as the Saudi public reward MBS for his rhetoric against Iran, then “diplomacy will seem unappealing”.

“If the Rouhani administration did decide to pursue diplomacy, it would face fierce resistance within Iran for this reason.”

Batmanghelidj feels the way the rivalry is developing, it is unclear who might be able to mediate effectively.

“Trump is the wrong interlocutor given his antipathy towards Iran, and the government of Oman, which has often played a mediator role in the region, sees limited scope for dialogue,” he said.

Toossi, of Princeton University, cautions that Trump’s threat to withdraw from the Iran nuclear deal could further draw a wedge between Saudi Arabia and Iran.

“A US withdrawal will greatly diminish chances for regional dialogue and cooperation and will increase Iranian opposition to US interests in the region,” he said. 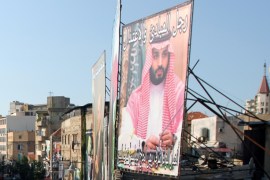 Saudi Arabia and Iran in war of words 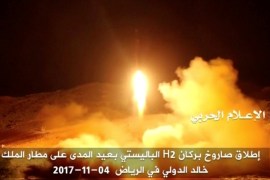 Tehran denies allegations it was behind an intercepted missile attack near Saudi Arabia’s capital, Riyadh, from Yemen.