Prerna Lal remembers how, when the last nationwide census was taken in the United States in 2010, her family decided not to fill out the form.

Lal and her family were living without legal status in the US at the time, and they were afraid of putting any personal information on a government document.

“My family wasn’t sure that … we’d be protected, or if this was the right thing to do, but it seemed like a calculated risk at the time,” Lal, who is now an immigration lawyer in Berkeley, California, recently told Al Jazeera in a telephone interview.

“We didn’t know what the implications were about being counted, the way we do now.”

The Department of Justice recently requested that a question about citizenship status be added to the 2020 US Census, a mandatory survey that is sent to every household in the US every 10 years.

The census aims to profile the country’s residents and collects data on demographics, income, housing, education and other social factors.

It is used to determine how more than $675bn in annual federal funding is allocated and how US congressional seats are distributed by state (according to population size).

The last time a citizenship question was asked on the nationwide survey was in 1950.

The US Department of Commerce formally announced plans to reinstate the question in late March.

The department said it would help the government better enforce the Voting Rights Act, which bans discrimination in voting practices, and “provide complete and accurate” data.

But the decision has sparked anger and concern among US civil liberty groups and legal organisations, which say it will lead to millions of people not filling out the form, and therefore, not being counted.

Immigrant communities, in particular, have voiced fears that by disclosing their citizenship status, they may face grave repercussions, such as deportation or having their immigration status revoked.

Those concerns “have been amplified by the anti-immigrant policies, actions, and rhetoric” from President Donald Trump and his administration, according to a lawsuit recently lodged against the move to add the citizenship question.

Filed in New York District Court, the legal complaint was made by a coalition of 17 US states, including New Jersey, New Mexico and Pennsylvania, and several cities, including New York, Chicago and Philadelphia.

Adding a question about immigration status to the census “will jeopardise critical federal funding needed by states and localities to provide services and support for millions of residents”, the lawsuit reads.

“Further, it will deprive historically marginalised immigrant communities of critical public and private resources over the next 10 years.”

The Department of Commerce has argued, however, that the American Community Survey, an annual survey sent out to a random sampling of about 3.5 million US households, has asked a citizenship question since 2005.

“Therefore, the citizenship question has been well tested,” the US Secretary of Commerce, Wilbur Ross, said in a letter dated March 26.

The US Census Bureau is also banned by law from sharing information it gleans from the census with any other government agency and must only use the data for statistical purposes.

But that hasn’t dispelled fears, especially for those have undocumented family members or are from mixed-status families.

“The government has shown over and over again that they’re interested in using data mining in any way possible to identify people and carry out [immigration] enforcement actions,” said Brian Root, a quantitative analyst at Human Rights Watch.

“It’s a valid fear. It is something that legally should not happen, but it is completely understandable,” Root told Al Jazeera.

California also filed its own lawsuit against the decision, as did the National Association for the Advancement of Colored People (NAACP).

Root said states with larger immigrant populations, such as California, Florida and Texas, could also lose representation in Congress as a result of inaccurate counts on the census.

That would be politically beneficial to Republicans and detrimental to Democrats, Root said.

“The distribution of political representation and appropriations for things like healthcare and housing and other types of government funding will be impacted,” he said.

Adding the citizenship question could also come with a hefty price tag.

Studies have also shown that every one-percent decrease in census participation costs the US Census Bureau $55 million because it will have to gather additional data, Root explained.

“There’s a large likelihood that it’s going to have a massive undercount and lead to inaccuracies, which will be extremely costly and will only serve to damage communities,” he said.

Hannah Matthews, director of childcare and early education at the Center for Law and Social Policy (CLASP), said she had grave concerns about what undercounting would mean for young children in particular.

As many as 10 percent of young children living in the US were missed on the 2010 census, she said.

With less funding going to their communities, youth may have more trouble accessing health, education and nutrition programmes like Medicaid or Head Start.

“Census data is used to determine the allocation for many different public programmes that are so vital to young children’s health and well-being,” Matthews told Al Jazeera.

A general atmosphere of fear under the Trump administration’s immigration policies is already having an effect on children, according to a recent CLASP report based on interviews with educators and parents in six US states.

More than five million children under the age 18 live with at least one parent who is undocumented, the report states. About 11 million undocumented immigrants live in the US today.

“You feel like you don’t know what’s going to happen,” an early childhood educator in Illinois said in the report. “That feeling of stability – emotional stability and security – is what most of our families have lost.”

Children are displaying anxiety at having a parent deported, or witnessing a parent arrested, the report found.

Their daily routines have been disrupted because their families are afraid to leave the house and many aren’t accessing social services because their parents are reluctant to sign them up for government-run programmes.

In this context, Matthews said the US government should be looking for ways to improve the accuracy of the census and it should “certainly not be putting barriers in place that would make people reluctant to answer these questions”.

‘We can’t not be counted’

The US Census Bureau must send the exact phrasing of the citizenship question to Congress later this year, where it will be tested. The bureau must also take public comments before coming to a final decision.

While US residents have a legal obligation to fill out the census, no one has been prosecuted for failing to do so since 1970, Politifact reported.

Under the law, the US government can issue a fine of up to $100 to someone who “refuses or wilfully neglects” to fill out the census and a fine of up to $500 if someone “wilfully gives any answer that is false”.

We can't not be counted; we have to figure out a way to be counted while also protecting our communities.

Lal, the immigration lawyer, advised people not to lie or misrepresent themselves on the census, since that could negatively affect their current immigration status or their ability to apply for citizenship later on.

Whatever people decide to do, she said there is a lot at stake.

“If we don’t count millions of people, we lose representation in Congress, we lose a lot of federal funding and we lose more power politically,” Lal said.

“We can’t not be counted; we have to figure out a way to be counted while also protecting our communities.” 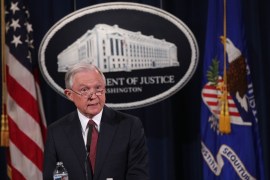 Fears over rushed trials as US immigration judges get quota

Immigration judges will be expected to complete 700 cases a year to reduce backlog of 680,000 cases.