Following Brazil’s Supreme Court decision to reject former President Luiz Inacio ‘Lula’ da Silva‘s plea to avoid jail time while he exhausts all appeals over his corruption conviction, Brazilians are divided on what the ruling means for the country.

Lula da Silva, who had high approval ratings during his presidency, was convicted last year of taking bribes in return for helping an engineering company gain contracts with the state-run oil company.

He has described the conviction as a “political witch-hunt” and his defence team maintains he was convicted without any material evidence.

Thursday’s Supreme Court decision was met by protests both in favour of and against the former president, representing a deep divide within the country.

“I see on Facebook and Twitter that people are totally insane,” Celso Dossi, a 39-year-old Brazilian writer, told Al Jazeera.

“Half is celebrating, the other half is mad,” he said. “I’m just trying to stay away to keep my sanity.”

Carlos Henrique de Oliverira Ramos, a student in Sao Paulo, said the decision is an ongoing attempt by the current government to keep Lula from power.

“[Lula’s] arrest without overwhelming evidence, however, it’s another chapter of an ongoing coup in Brazil since 2016, with the powerful deposing of Dilma for a crime of responsibility that was legalised a few days after it is stopped,” Carlos Henrique de Oliverira Ramos, a student in Sao Paulo, told Al Jazeera, referring to the impeachment of former President Dilma Rousseff, which she and her supporters have repeatedly called a “coup”.

Eduardo Jose Alfonso, a professor at Sao Paulo University, agreed, saying: “The current government is doing everything possible to ensure that Lula cannot be re-elected.”

For Rafeal Longo, a 28-year-old kinesiologist from Sao Paulo, however, the ruling “represents a start of a new cycle of Brazilian democracy where politicians like ex-presidents aren’t above the law”.

“It means the people have awoken and can fight for their rights,” Longo told Al Jazeera.

‘We are without hope’

A judge issued an arrest warrant for Lula da Silva late on Thursday, giving him 24 hours to turn himself in and begin serving his 12-year prison sentence.

The former leader had hoped to run for president in October’s elections, but Thursday’s ruling may had dashed any hopes of continuing his political career.

Despite the uncertainty, Lula da Silva currently leads the polls by a wide margin, and his Workers’ Party has vowed to put him forward as its candidate.

“Lula continues to be our candidate, because he is innocent, and because he is the leading candidate to become the next president of Brazil,” Senator Gleisi Hoffmann, the leader of Workers’ Party, said on Thursday, according to Reuters news agency.

According to Brazilian law, a person cannot run for office for eight years after being found guilty of a crime. Some exceptions are allowed, however, and the decision on Lula da Silva’s candidacy will ultimately be made by the top electoral court if he officially files to run.

For many, such uncertainty represents a wider issue of lack of political options in Brazil.

“This year’s elections candidates are not good, and we are without hope,” said Clarice Barbosa, a 48-year-old civil servant from Sao Paulo.

“While the car wash investigation shook the structures of power, nothing will be the same as before,” Barbosa told Al Jazeera.

“We are waiting for what will be the next president, but the prospects are not good.” 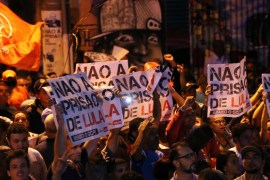 Brazil’s former president has until Friday 20:00 GMT to turn himself in to start serving a 12-year sentence. 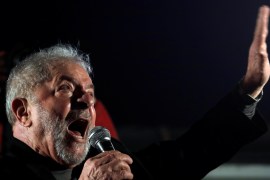 Supreme Court will decide in April if Lula will have to serve a 12-year prison sentence over corruption charges. 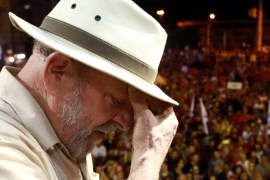 Luis Inacio ‘Lula’ da Silva is currently leading the presidential election polls in Brazil. But he may be jailed soon.