One of the two suspects in the murder of a Filipina maid in Kuwait has been arrested and detained in Lebanon, according to the Philippine department of foreign affairs.

Nader Essam Assaf, a Lebanese national, was arrested in his home country for the death of Joanna Demafelis, Alan Cayetano, the Philippine foreign affairs secretary, said in a statement on Friday.

Cayetano said President Rodrigo Duterte “welcomes the news” of the arrest and expects Kuwaiti authorities to request the extradition of Assaf to stand trial in Kuwait.

“Assaf’s arrest is a critical first step in our quest for justice for Joanna, and we are thankful to our friends in Kuwait and Lebanon for their assistance.”

A second suspect remains unaccounted for.

Demafelis had gone missing in September 2016, and her body was found in a freezer in an abandoned apartment in Kuwait earlier this month.

She left for Kuwait in 2014 hoping to earn enough to support her family.

The statement said a senior Kuwaiti security official informed the Philippine ambassador to Kuwait of the arrest.

Earlier, Mousaed Al Thwaikh, Kuwait’s ambassador to the Philippines, assured the Philippine government that his country would do everything it can to find the suspects.

Assaf and his wife, Mona, a Syrian national, are accused of torturing and killing 29-year-old Demafelis.

Mona remains wanted and is believed to be in Syria.

Interpol later launched a manhunt for the two suspects.

Demafelis’ death prompted Duterte to order a ban on further deployment of Filipino workers to Kuwait, triggering a diplomatic crisis.

Duterte had vowed to seek justice for Demafelis and other Filipino workers being abused by their employers abroad.

He also dispatched commercial aeroplanes to Kuwait to bring back to the Philippines all Filipino domestic workers who wanted to return home.

Duterte had condemned what he sees as a pattern of mistreatment of Filipino workers.

Kuwaiti officials have criticised the ban, saying Duterte’s statements have only served to complicate the situation further.

The Philippine government later clarified that workers with documents already in place can still leave for Kuwait.

On Thursday, a delegation of Filipino officials travelled to Kuwait to discuss the controversy with their Kuwaiti counterparts. 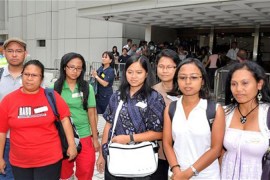 High Court ruling could could lead to more than 100,000 foreign maids winning right to residency. 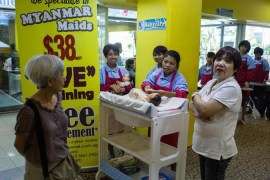 In Singapore, maids are put on display and made available for ‘purchase’ in central shopping malls. 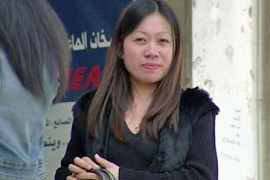 We discuss the abuse many Asian house maids face when working in the Middle East.