Residents and medical sources in Eastern Ghouta have warned that the Damascus suburb is running short of food, water and medical supplies amid intense Russian and Syrian bombardment of the rebel-held area.

The area’s designation as a de-escalation zone by Turkey and allies of the Syrian government, such as Russia and Iran, has not prevented Syrian forces aided by Moscow from trying to capture the area.

Nearly 200 people have died in four days of intense bombardment in the area, whose 400,000 residents have been besieged since 2013.

Ahmed Al-Khaled, a wheelchair-bound 34-year-old father of two, told Al Jazeera the area was being “pounded by rockets” day and night by Syrian warplanes, and that residents had few places where they could seek safety.

“When the bombing happens, we don’t hide in basements because people die in them,” he said.

“The rockets being used tear the buildings apart and people get buried under the rubble where they hide,” he explained.

Khaled said Syrian and Russian forces made no distinction between civilian and military targets and that the simplest of tasks was fraught with the danger of death.

“My wife goes to get food from a nearby street every day and says a last goodbye whenever she leaves…like a last farewell – in case she dies and never comes back again.”

“People here feel that there is no shelter or safe place to avoid the shelling,” he said, adding: “I feel a serious threat to my and my family’s life.”

Ahmad explained that, given the shortages of food and water, many were taking desperate measures to stay alive.

“We are suffering from a major shortage of drinking water and food.

“We’re depending on wells that we’ve drilled ourselves…water, which according to laboratory analysis is not drinkable.”

Even hospitals and clinics, already suffering from a lack of medical supplies, have not been spared the violence.

Aid groups had previously condemned the Syrian government’s targeting of medical facilities and said at least 10 hospitals had been put out of commission by air raids since December of last year.

Dr Abdul Wahab Abu Yahya, who is based in the area, told Al Jazeera that medics were struggling to save victims of the violence due to the combined effect of the attacks and a dearth of supplies.

“There isn’t a secure place in the hospital to properly operate on patients,” he said.

“Even when the situation is calm, we face difficulties running generators for the hospitals- the shortage of fuel is making it hard for us to save the lives of those who are getting injured.

Abu Yahya said there were “piles of injured people” at his hospital and that he was struggling with a lack of staff and medical supplies.

“We hope that this barbaric campaign against us will stop,” he said.

After seven years of civil war, and with help from Iranian-backed ground forces and Russian air cover, Syria’s government has the upper hand against rebels, who have just two major areas under their control; Idlib in Northern Syria and Eastern Ghouta in Damascus.

Buoyed by a feeling that momentum is on their side, forces loyal to Syrian President Bashar al-Assad have pushed to recapture those areas from the opposition.

Opponents of the Syrian government say that effort has involved the use of indiscriminate attacks against civilians and the use of chemical weapons.

Around 500,000 people have died in the war, according to monitoring groups. 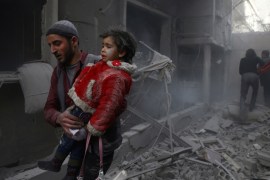 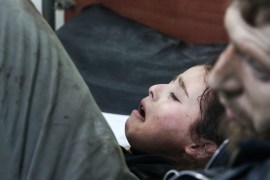 At least 22 children among the dead as Russian and Syrian government warplanes continue to pound the rebel-held area.