Just over a year ago, the US government earned the wrath of Israeli Prime Minister Benjamin Netanyahu after it ignored his demand to veto a UN Security Council resolution condemning Israeli settlements in occupied Palestinian land.

Netanyahu summoned the US ambassador in response to the December 2016 vote and made little attempt to disguise his ire at then-President Barack Obama, whose administration he accused of helping the resolution pass.

However, the anger at the US was shortlived, and within a month there was a new president at the helm of the White House; one styled as the “most pro-Israel”president ever.

Under President Donald Trump, the US has announced that it will recognise Jerusalem as Israel’s capital and obliged Israeli demands to cut funding to UNRWA, the UN development body tasked with helping Palestinian refugees.

However, it’s not just in Israel and Palestine that Trump’s presidency has had an effect, ostensibly at least.

The US president has refused to certify that Iran is abiding by its requirements under the Joint Comprehensive Plan of Action (JCPOA); the landmark deal between Tehran and world powers, under which Iran agreed to limit its nuclear energy programme in return for sanctions relief. He has, however, waived Iran nuclear sanctions “for the last time”, keeping the deal in place, at least for now.

Also, when an Arab quartet consisting of Saudi Arabia, the UAE, Bahrain, and Egypt, broke of diplomatic ties with Qatar, Trump initially tweeted his approval, though he later softened his stance, calling on the countries to resolve their differences diplomatically.

While some experts have suggested Trump‘s foreign policy is responsible for destabilising the region, analysts Al Jazeera spoke to said the roots of these three diplomatic crises go far deeper.

Jerusalem: ‘Trump’s position is not new’

Trump was, for example, widely condemned for his decision to recognise Jerusalem as Israel’s capital and has angered allies with his threats to the Iran nuclear deal, but the extent to which his policies are not in keeping with traditional US foreign policy is up for debate.

Nadia Naser-Najjab, a research fellow in Palestine Studies at the University of Exeter, told Al Jazeera that the main change in US foreign policy on the Palestinian issue since Trump took power was simply “bolder language and different wording”. His actions, she said, were in keeping with longheld US policy.

I think the problem is that we tend not to look at history...Trump's position is not new, and it is in line with all American presidents

“Trump’s policies are not new and they are not an anomaly for the US,” Naser-Najjab explained, pointing out that US presidents had backed Israel since its inception.

“Since the Second World War, if you look at the quotes by [US President Harry] Truman, you will see a total bias for the Zionist movement.

“I think the problem is that we tend not to look at history … Trump’s position is not new, and it is in line with all American presidents.”

According to Naser-Najjab, this tradition was upheld by Trump’s predecessor Obama, and was evident in his opposition to attempts by the Palestinian to secure UN membership in 2011.

The recognistion of Jerusalem and the cuts to UNRWA did not happen under Obama, but they were a long time coming, she argued.

Beyond Palestine and Israel, Trump has also been a participant in the ongoing GCC crisis, which started almost immediately after his visit to Saudi Arabia in May 2017.

Trump’s initial support of Riyadh and his condemnation of Qatar put him at odds with both his most senior diplomats and military commanders.

Within days of Trump tweeting out support for the move, US Secretary of State Rex Tillerson called on Saudi Arabia and its allies to ease the blockade on Qatar.

The US military also stated that it had no plans to change its posture on Qatar and praised the state for its “enduring commitment to regional security”.

Qatar is a key US ally and hosts the US Central Command and 10,000 US troops at Al-Udeid airbase.

After a shift in tone, Trump reversed his previous criticism and praised Qatar for its role in fighting “terrorism and extremism”.

Joe Macaron, a policy analyst at the Arab Center Washington, DC, explained that Trump’s initial support for the Saudis had been tempered by those around him.

“It is true that Trump might have insinuated that the US could turn a blind eye to such an assertive foreign policy, however, developments in the past year showed us that the establishment in Washington has successfully restrained the Saudi approach,” he said.

In any case, Macaron argued that Saudi Arabia’s “emboldened” foreign posture, which accompanied leadership changes in January 2015, worked with little regard for US objections.

“The first two major crises Crown Prince Mohammed bin Salman was involved in; the war against the Houthis [in Yemen] and severing ties with Tehran, were a reaction to President Obama’s decision to sign the nuclear deal with Iran.

“Once Trump came to power and signalled Iran as a foe, Mohammed Bin Salman shifted focus to consolidating power at home, which led to the embargo against Qatar and [Lebanese Prime Minister Saad Hariri’s] mysterious resignation.”

While the Saudis may have welcomed Trump’s ascent to the presidency, for Iranians, his presidency represents a continuation of Obama-era policy, according to the University of Tehran’s Professor Mohammad Marandi.

Trump has repeatedly railed against the deal, describing it as the “worst deal ever” despite objections from his European allies.

Iran and and world powers, including the US, signed the JCPOA in 2015 after years of diplomatic wrangling between western and Iranian diplomats.

The eventual agreement, saw Iran reduce the number of centrifuges that were capable of enriching Uranium to the levels required to produce a nuclear weapon.

In exchange, some US sanctions were lifted and frozen Iranian funds were released.

The deal was widely seen as one of Obama’s most significant diplomatic achievements but tensions between Tehran and Washington remained tense.

In October, Trump refused to recertify that Iran was in compliance with the agreement. The move put the onus on Congress to restore sanctions and dismantle the deal, but that did not happen. Most recently, Trump again waived Iran nuclear sanctions, vowing it would be the “last time” he would do so unless changes are made to the agreement.

Marandi said that Trump’s threat to scrap or renegotiate the deal are nothing new, and that the US had not honoured the deal under Obama.

“There is a strong degree of continuity, because Trump, like Obama, violated the JCPOA repeatedly,” he said referring to sanctions imposed by the Obama administration over Iran’s ballistic missile programme after the nuclear deal was signed.

Where Trump’s threat over the nuclear deal has had an effect is on Iran’s future readiness to discuss other isues with the US.

According to Marandi, a US failure to abide by the conditions set out in the JCPOA, would confirm Iranian suspicions that the US could never be relied upon to respect a deal.

“Until this agreement is fully implemented, there is no way whatsoever that the Iranians are going to negotiate with the Americans over anything else.

“This is a litmus test for Iran … the very fact that the US has violated the current agreement, so repeatedly, under both administrations, shows that if the Iranians appeased the Americans and went for further talks, they would simply behave in the same way in the future.” 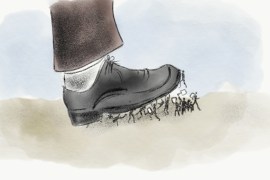 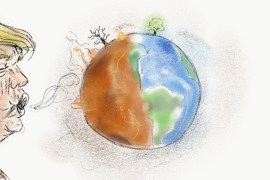 One year under Trump: ‘Attack’ on climate change fight

US president is rolling back the country’s efforts to fight climate change. Here’s a look at what he has done so far.