The head of Palestinian group Hamas, Ismail Haniya, has travelled to Cairo to hold talks with senior Egyptian officials about the blockade of Gaza, on his first such visit since his election in May.

Hamas controls the Gaza Strip, a densely populated coastal territory that shares borders with Egypt and Israel, with which it has fought three wars since 2008.

For much of the last decade, Egypt has joined Israel in enforcing a crippling blockade that has deprived the enclave’s roughly two million inhabitants of most basic commodities, including food, fuel and medicine.

A Hamas statement on Saturday said the delegation would discuss “mechanisms to ease the siege on Gaza and other issues of mutual concern”.

An Egyptian source confirmed Haniya’s arrival with a delegation for talks on the border crossing, security and power supplies, Reuters news agency reported.

Following the talks in Cairo, the Hamas delegation “may conduct a tour of some Arab and Muslim countries”, Anadolu Agency reported, citing a “well-informed Hamas source”.

The source did not specify which countries the tour would include.

The Gaza Strip has seven border crossings linking it to the outside world. Six of these are controlled by Israel, while the seventh – the Rafah crossing – is controlled by Egypt, which continues to keep it tightly sealed for the most part.

Hamas has been seeking to improve relations with neighbouring Egypt in a bid to convince Cairo to open the territory’s border with Gaza – its main gateway to the outside world.

Haniya, 54, was elected leader of Hamas’ political bureau in May. The group maintains a sizeable armed wing in Gaza since seizing the enclave from Fatah in 2007. 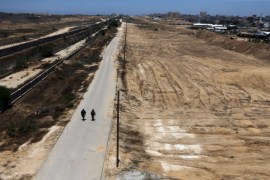 Several Hamas security men also injured in the bombing blamed on ISIL near the Palestinian enclave’s border with Egypt.