The number of Rohingya Muslims fleeing to Bangladesh in the last two weeks to escape the violence in Myanmar has shot up to about 270,000, a spokeswoman for the UN High Commissioner for Refugees said.

Vivian Tan said the number had jumped from an estimate of 164,000 on Thursday because the agency had found new pockets of refugees in border areas.

A UN official told AFP news agency on Friday that more than 1,000 people may already have been killed in Myanmar, mostly minority Rohingya Muslims.

“This [the refugee figures] does not necessarily reflect fresh arrivals within the past 24 hours but that we have identified more people in different areas that we were not aware of before,” said Tan.

“The numbers are so alarming. It really means we have to step up our response and that the situation in Myanmar has to be addressed urgently.”

The fresh influx of refugees across the border has overwhelmed camps in Bangladesh that were already bursting at the seams.

“The two refugee camps in Cox’s Bazar in southeast Bangladesh – home to nearly 34,000 Rohingya refugees before this influx – are now bursting at the seams. The population has more than doubled in two weeks, totalling more than 70,000. There is an urgent need for more land and shelters,” UNHCR said in a briefing note for reporters in Geneva.

“The vast majority are women, including mothers with newborn babies, families with children. They arrive in poor condition, exhausted, hungry and desperate for shelter.”

The Rohingya have long been subjected to discrimination in Buddhist-majority Myanmar, which denies them citizenship and regards them as illegal immigrants from Bangladesh, even if they have lived in the country for generations.

Myanmar’s army has previously said it had killed 387 Rohingya fighters. Authorities say they have lost 15 security personnel since the August attacks.

Rights groups, activists – including many who campaigned for her in the past – and her fellow Nobel laureates Malala Yousafzai and Archbishop Desmond Tutu have condemned her.

When it awarded Aung San Suu Kyi the 1991 Peace Prize, the Nobel committee said that she “emphasises the need for conciliation between the sharply divided regions and ethnic groups in her country”.

But earlier this week, in her first statement since the violence erupted, Aung San Suu Kyi, 72, condemned a “huge iceberg of misinformation” on the crisis, without mentioning the Rohingya flocking to Bangladesh.

Meanwhile, Rohingya Muslims are warning that unless the international community takes a firm stance against the violence, the country could witness “ethnic cleansing on the scale of the Srebrenica massacre”.

On Tuesday, UN Secretary-General Antonio Guterres also warned of the risk of ethnic cleansing, appealing to Aung San Suu Kyi and the country’s security forces to end the violence.

Two Rohingya sources told Al Jazeera on Thursday that several people had been shot dead near the Maungdow township in Rakhine, with thick plumes of smoke seen billowing from the village of Godu Thara after security forces burned down the homes of fleeing Rohingya.

Access to the area has been blocked to foreign media so Al Jazeera cannot independently verify the sources’ accounts.

Speaking to Al Jazeera from Maungdow township under a pseudonym, Anwar, 25, said there was a “sustained and targeted military campaign against Muslims”.

“The Myanmar army and Buddhist extremists are specifically targeting the Muslim population,” he said.

“Women, children, the elderly – no one has been spared. The situation is continuing to get worse, and Aung San Suu Kyi’s government is failing to raise its voice,” Anwar added. 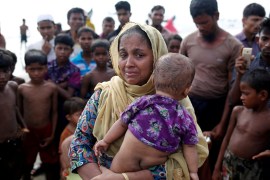 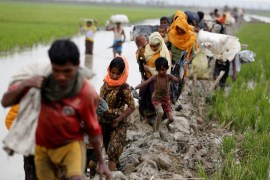 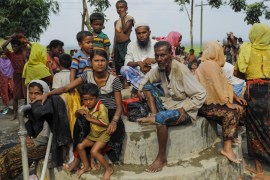 At least five children have drowned after a boat carrying Rohingya refugees sink at the mouth of the Naf river.