Shortly after calling for unity and offering to mediate in a diplomatic crisis between Qatar and its neighbours, US President Donald Trump has held a phone conversation with the Qatari emir to discuss the latest developments in the Gulf.

The call on Thursday followed a White House meeting between Trump and the emir of Kuwait, who is mediating in the dispute since June 5, when a Saudi-led group announced it was cutting ties with Qatar, accusing it of supporting “terrorism”. Doha denies the allegations.

During his conversation with Trump, Qatari Emir Sheikh Tamim bin Hamad Al Thani welcomed Trump’s position on the need to resolve this crisis through dialogue to ensure the unity of the Gulf Cooperation Council (GCC), according to Qatar’s state media.

The Qatari emir also expressed Doha’s position on resolving “differences through constructive dialogue that does not affect the sovereignty of states”, Qatar News Agency reported.

OPINION: The energy factor in the GCC crisis

For his part, Trump pledged his commitment to ending the crisis, stressing the importance of maintaining unity while trying to defeat “terrorism”.

“The president underscored the importance of all countries following through on commitments from the Riyadh Summit to maintain unity while defeating terrorism, cutting off funding for terrorist groups, and combatting extremist ideology,” read a statement by the White House issued on Friday.

Trump met leaders and representatives of 55 Arab and Muslim-dominated countries in Saudi Arabia’s capital, Riyadh, in late May, to discuss, among others, security and the fight against armed groups.

On June 5, Saudi Arabia, the UAE, Bahrain and Egypt announced they were imposing a land, sea and air blockade against it.

On June 22, the group issued a 13-point list of demands, including the shutdown of Al Jazeera, limiting ties with Iran, and expelling Turkish troops stationed in the country as a prerequisite to lifting the blockade.

Doha rejected all the demands, denouncing them as attempts to infringe Qatar’s sovereignty.

Earlier on Thursday, at a joint press conference with Kuwait’s emir, Trump had said he supported Sheikh Sabah Al Ahmad Al Sabah’s mediation efforts, but if that did not manage to resolve the Gulf crisis, he would be “willing to be a mediator”.

“We call on our GCC and Egyptian allies to focus on our commitments at that Saudi Arabia summit to continue our joint efforts to drive out and defeat terrorists,” Trump said.

“Qatar, Saudi Arabia, the United Arab Emirates, Bahrain and Egypt are all essential US partners in this effort.”

At the press conference with Trump, the emir of Kuwait said he was glad that military action against Qatar was no longer being considered.

“What is important is that we have stopped any military action,” Sheikh Sabah said.

In a joint statement, the blockading nations expressed regret about the Kuwaiti emir’s comment.

“The military option was not and will not be [used] in any circumstance,” it said.

Mahjoob Zweiri, an associate professor in contemporary history of the Middle East at Doha University, said the Kuwaiti emir’s comments marked the first time that a main player in the efforts to defuse the crisis spoke publicly about the possibility of a military option.

“It was something that some people were whispering about, there were assumptions everywhere, but this was something where you see someone like the emir of Kuwait, who is the main mediator in this crisis, coming out and saying that this is now not on the table,” Zweiri told Al Jazeera.

“This doesn’t mean that it was on the table, and this tells us basically a sort of concern from different parties that this option may be used by the four countries.” 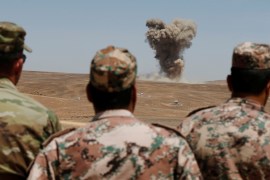 The growing militarisation of the GCC

The Gulf Coordination Council (GCC) countries are some of the most heavily armed in the world. 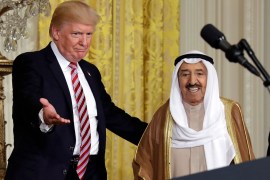