An Indian court has sentenced to death two men convicted of involvement in a series of bombings that killed 257 people in Mumbai in 1993.

The court sentenced Feroz Abdul Rashid Khan and Taher Merchant to death, while two others, Abu Salem and Karimullah Khan, were jailed for life, Deepak Salvi, a lawyer for the federal police, said on Thursday.

A fifth man, Riyaz Siddiqui, was sentenced to 10 years in prison, Salvi said.

The five men were convicted earlier of criminal conspiracy and murder in the planting of 12 powerful bombs in cars, scooters and suitcases around India’s financial capital.

A sixth man also found guilty at that time but died in prison before sentencing.

Lawyers for the convicted men did not answer their telephones, and it was not immediately known if they would appeal against the sentences.

Investigators said the bombs were ordered by India’s most wanted man, gangster Dawood Ibrahim, to avenge the demolition of the historic Babri mosque in north India by a Hindu mob in 1992, during a period of religious conflict.

Those blasts targeted a number of prominent sites in Mumbai, including the stock exchange, Air India building, hotels, a cinema and shopping bazaars.

The bombings prompted religious riots in parts of India, leaving more than 800 dead, both Hindus and Muslims.

India says he has been living in Karachi, Pakistan’s financial hub, after fleeing from Mumbai, and has asked Pakistan to hand him over to face trial in India.

Legal proceedings against those accused of being involved in the bombings have resulted in more than 100 convictions, most of which are still winding their way through the legal system because of appeals and commutations of sentences.

One suspect in the case, Yakub Memon, was hanged in 2015.

This sentencing ended a second trial related to the bombings.

An initial trial ended in 2007 with more than 100 people convicted, of whom 11 were sentenced to death and the rest to various terms in prison. 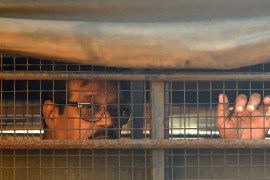 The men were convicted for their role in the 1993 attacks that killed 257 people and injured hundreds.