Nearly every building on the island of Barbuda has been damaged and almost 900,000 people have been left without power in Puerto Rico as the Category 5 Hurricane Irma continues its journey towards mainland United States.

“Either they were totally demolished or they would have lost their roof,” Browne said after returning to Antigua from a plane trip to the neighbouring island.

“It is just really a horrendous situation.”

Browne said roads and telecommunications systems were destroyed and recovery will take months.

A two-year-old was killed as a family tried to escape a damaged home during the storm, he said.

Puerto Rico was buffeted by powerful winds and heavy rain as authorities struggled to get aid to small Caribbean islands already devastated by the storm.

The US National Weather Service said Puerto Rico had not seen a hurricane of Irma’s magnitude since Hurricane San Felipe in 1928, which killed a total of 2,748 people in Guadeloupe, Puerto Rico and Florida.

But as the storm moved west, it devastated the small islands in its path.

Significant effects were reported on Saint Martin, an island split between French and Dutch control.

Photos and video circulating on social media showed major damage to the airport in Philipsburg and the coastal village of Marigot heavily flooded.

By late Wednesday, the centre of the storm was about 135km north-northwest of San Juan, Puerto Rico, and heading west-northwest at 26 kph.

The US National Hurricane Center said Irma’s winds would fluctuate, but the storm would probably remain at Category 4 or 5 for the next day or two as it moves past just north of the Dominican Republic and Haiti on Thursday, nears the Turks and Caicos and parts of the Bahamas by Thursday night and touches Cuba on Friday night.

It will then probably head north towards Florida, which rushed to prepare for a possible direct hit on the Miami area with potentially catastrophic 300kph winds.

There are now 3 hurricanes in the Atlantic. Get the latest forecast tracks from https://t.co/XZO7pOrOHA. Prepare. Plan. Stay informed. 💻📱📺📻 pic.twitter.com/17Ue9V2CJh

“On Wednesday, two tropical storms in the Atlantic basin were upgraded to hurricanes,” he said.

“This has become a storm season of the likes never seen before in the Caribbean.”

For its part, the UN estimates as many as 37 million people could be affected by Hurricane Irma.

Stephane Dujarric, UN spokesman, said the UN has deployed a humanitarian team to Barbados to work with the Caribbean Disaster Emergency Management Agency to help hurricane victims and additional teams are on standby. 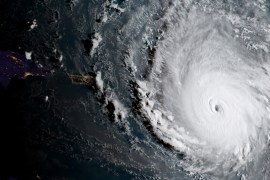 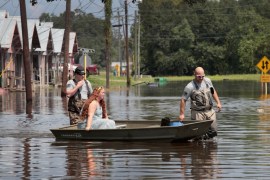 Texas governor estimates Harvey damage at up to $180bn

US president asked congress for nearly $8bn for recovery efforts after storm, but governor says Texas needs a lot more.