The European Union’s highest court has dismissed complaints raised by Slovakia and Hungary against a mandatory quota to accept asylum seekers, established as part of efforts to resettle arriving refugees more equally across the bloc.

EU countries agreed in September 2015, at the height of Europe’s migrant crisis, to relocate 160,000 refugees from Greece and Italy over two years. Yet, only approximately 27,700 people have been moved so far.

Slovakia and Hungary’s legal action, which was seeking to have the refugee-sharing scheme annulled, was struck out on the grounds that current EU policy is “proportionate”, a European Court of Justice (ECJ) statement said on Wednesday.

The long-awaited ruling added: “The mechanism actually contributes to enabling Greece and Italy to deal with the impact of the 2015 migration crisis.”

The court’s decision is final and not open to appeal. As a result, European Commission (EC) officials will continue to be able to order member state governments to take in specific quotas of refugees entering the bloc, or risk facing fines.

EU REFUGEE-SHARING SCHEME, BY THE NUMBERS:

According to the UN refugee agency, 125,240 refugees have made the Mediterranean crossing to Europe so far this year – mainly to Italy and Greece.

That reduction has helped ease the pressure on Italy and Greece, but political strains are still evident.

At the height of the crisis, in 2015, EU leaders forced through a vote to relocate up to 160,000 refugees from Italy and Greece to new homes spread around the EU member states.

It was a bitterly contested policy. Hungary, Czech Republic, Romania and Slovakia all voted against a compulsory relocation scheme, but they were over-ruled.

The UK used a legal exemption to opt out of the scheme. A month after the vote, Poland elected a new right-wing government which promptly refused to cooperate with the EU plan.

But in reality, the prediction of 160,000 turned out to be an overestimate.

To date, approximately 27,000 of the eligible refugees have now been relocated. That’s more than 75 percent, but countries’ willingness to participate remains patchy.

Malta, Latvia and also Norway have taken in their full quota of refugees from Greece.

Finland, Lithuania and Luxembourg have achieved more than 80 percent of their quotas.

Austria, Hungary and Poland still have not accepted any asylum seekers.

The Czech Republic has not relocated anyone since August 2016. Slovakia has taken in just 16 refugees and Liechtenstein just 10.

‘Stick to the ruling’

The verdict was welcomed by top European officials.

Ska Keller, the lead parliamentarian on the scheme, said the verdict means “there is no excuse” for EU states not to share refugees from Greece and Italy as they have committed to do.

German officials were also quick to announce their support for the ruling, with Sigmar Gabriel, the foreign minister, encouraging member states to act swiftly following the decision.

“It is right to clarify questions legally if there is doubt. But now we can expect all European partners to stick to the ruling and implement the agreements without delay,” he said.

Slovakia’s Prime Minister Robert Fico said his country respected the court’s judgement, adding, however, that its critical stance on the quota system and the migrants “has not changed at all”.

“We will continue to work on having solidarity expressed in different ways other than forcing [on us] migrants from other countries that don’t want to be here anyway,” he said.

Peter Szijjartom, the nation’s foreign minister, claimed the decision was made on political rather than legal considerations and “jeopardises the security and future of all of Europe”.

“The Hungarian government considers today’s decision by the European court to be appalling and irresponsible,” he said.

INSIDE STORY: What’s the EU’s vision to address the refugee crisis?

Al Jazeera’s Sonia Gallego, reporting from Budapest, confirmed Hungary is now seeking $470m of compensation for border reinforcements developed since the scheme was introduced, including razor wire fencing and the employment of 3,000 guards.

The EU has agreed to examine the request, though how Hungary reached the precise figure remains unclear.

The compulsory relocation scheme was backed by a majority of EU member states but was rejected by Slovakia, the Czech Republic, Romania and Hungary.

The UK used a legal exemption to opt out of it, while Poland, which accepted the plan, later refused to cooperate when a new right-wing government came to power.

Kati Piri, a member of the European Parliament for the Netherlands, predicted that disputes over migration would continue in the bloc regardless of the ECJ’s ruling.

“The political battle has not yet been finished,” she told Al Jazeera in Brussels.

INSIDE STORY: Is the EU closer to solving the migration crisis?

The EU executive is now believed to be ready to institute court proceedings within weeks that could lead to fines for member states not complying with the scheme.

“If the member states that have not relocated at all or not for a long time do not change their approach in the coming weeks, we should then consider to take the last step in the infringement procedure, taking Poland, Hungary and the Czech Republic to the ECJ,” said Avramopoulos.

Slovakia is not included in the legal action. It recently agreed to host a few refugees. 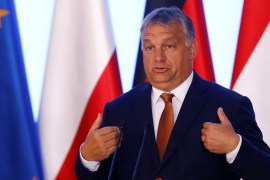 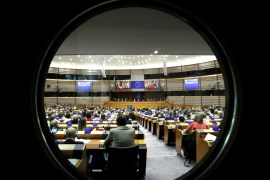 The rise and fracture of the European Union

We examine the history of the European Union and ask if it can withstand the challenges posed by populism.