His conditions include the sacking of several election commission officials, a review of the electronic transmission of results and for all eight presidential candidates who took part in the August 8 poll to be allowed to contest the October 17 election.

“There will be no elections on the 17th of October until the conditions that we have spelt out in the statement are met,” he said on Tuesday.

READ MORE: Why did Kenya’s Supreme Court annul the elections?

It is the first time a presidential election result has been overturned in Africa, and follows three failed bids by Odinga for the presidency, in 1997, 2007 and 2013.

An angry Kenyatta, while saying he would respect the decision, criticised the judges, saying: “Every time we do something a judge comes out and places an injunction. It can’t go on like this … there is a problem and we must fix it.”

Kenyatta also branded the judges “crooks”, prompting a strong reaction from the judiciary about his “veiled threats” which it called an “assault on the judiciary”.

Al Jazeera’s Barnaby Phillips, reporting from the Kenyan capital, Nairobi, said Odinga’s camp had various demands for the election to be carried out in a fair way.

“They have been saying that the head of the electoral commission should be replaced, and they want a different company to be involved in the printing of ballot papers. Moreover, they are not happy with the computer method of transmission” he said.

“There are still very contentious issues in a highly charged atmosphere.”

Odinga has contested and lost the last three presidential elections in Kenya. Each time, he has said the vote was rigged against him. 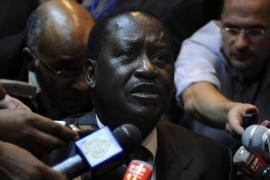 Can Kenya overcome its divisive ethnic politics and maintain its status as an African powerhouse?