The US says it has open channels of communication with North Korea and is “probing” whether the Pyongyang government is ready to enter talks on giving up its nuclear weapons programme.

Rex Tillerson, the US secretary of state, made the remarks on Saturday after an afternoon of talks with China’s top diplomats and President Xi Jinping centred on the nuclear crisis and preparations for President Donald Trump’s visit to Beijing in November.

“We are probing, so stay tuned,” Tillerson said.

“We’re not in a dark situation, a blackout; we have a couple, three channels open to Pyongyang.”

The US is looking to an economic squeeze of North Korea it hopes will compel the country’s retreat from nuclear arms and missile programmes.

The US sees China as critical to averting a military confrontation with North Korea, which is fast advancing towards its goal of developing a nuclear-tipped missile capable of reaching the US.

When asked if China was acting as a go-between for communication with North Korea, Tillerson said the US has its “own channels”.

Moscow, meanwhile, is prepared to work with Pyongyang to try to find a peaceful resolution to the North Korean missile crisis, the Russian foreign ministry said on Friday.

The comments came in a statement issued by the ministry after a meeting between Russian ambassador-at-large Oleg Burmistrov and Choe Son-hui, director-general of the North American department of North Korea’s foreign ministry.

“The Russian side confirmed its readiness to combine efforts in the interests of finding ways to solve the problems in the region by peaceful, political and diplomatic means,” it said.

China says it will strictly and fully enforce UN resolutions against North Korea and its Commerce Ministry on Thursday said North Korean firms and joint ventures in China and overseas would be shut down by January, in line with the latest UN resolution.

Einar Tangen, a political analyst and adviser to China’s government, said there’s not much more Beijing can do to curtail Pyongyang’s nuclear programme.

“From the Chinese perspective, they see two speeding trains on the same track going full tilt at one another. North Korea has enshrined its nuclear programme in its constitution, there’s no way they are going to give up what they see as the only point of leverage,” Tangen told Al Jazeera.

“From the US side, a nuclear-armed North Korea capable of delivering an attack against US territory is unacceptable. So you have two groups who are not willing to budge an inch. What we need here is diplomacy, not deal-makers. It will require outside-the-box thinking by China and Russia if they want to resolve this.”

Earlier this week, US Senator John McCain, who heads the Senate Armed Services Committee, said he was sceptical.

“China has not done anything for the last three presidents. I’m not sure that they’re going to do anything with this one,” McCain told a security conference in Washington, DC.

McCain has repeatedly warned the US, which neither wants to live with a nuclear-armed North Korea nor go to war with it, may be faced with “unacceptable options”.

US officials have declined to discuss operational plans, but acknowledge no existing plan for a pre-emptive attack could promise to prevent a counterattack by North Korea, which has thousands of artillery pieces and rockets trained on South Korea’s capital Seoul – a city of 25 million people.

Tillerson has in the past expressed hope for dialogue with North Korea. US diplomats have also sought to assure Pyongyang that Washington is not seeking to overthrow leader Kim Jong-un, even as Trump and Kim exchange insults and threats of war.

“We are not seeking regime change or collapse,” Susan Thornton, a state department assistant secretary who is travelling with Tillerson, told a Senate hearing.

Thornton’s remarks were welcomed in Beijing, which is calling for a peaceful solution to the crisis.

Lu Kang, Chinese foreign ministry spokesperson, said the US had issued many “positive signals” that the North Korean nuclear issue should be resolved via talks.

Still, it is unclear how and when negotiations with Pyongyang might be possible.

McMaster said there was no set list of preconditions for talks but added Pyongyang’s capabilities had advanced too far to simply freeze its nuclear programme in return for concessions. 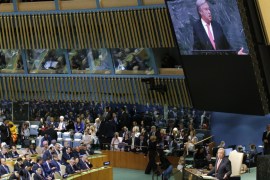 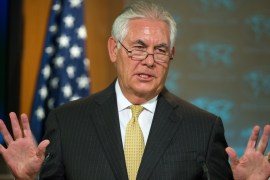