North Korea has conducted six nuclear weapon tests – including Sunday’s test. Its first experimental blast took place more than a decade ago as Pyongyang continues to try and join the handful of nuclear weapons states.

October 2006 – Pyongyang carried out its first nuclear explosion in a tunnel in a remote northeast mountainous area of Punggye-ri.

The test produced an explosion of about one kilotonne (one kilotonne = 1,000 tonnes) and prompted international condemnation.

After the rest, the United States Geological Survey (USGS) said it had detected a tremor of 4.2 magnitude on the Korean Peninsula.

May 2009 – Pyongyang carries out its second nuclear weapon test. The explosion, like the one before it in 2006, is done underground. The USGS said the atomic test caused an earthquake measuring magnitude 4.7 in Kilju county in the country’s northeast.

The explosion had an estimated yield of two to eight kilotonnes. The blast was felt more than 200km away in the Chinese border city of Yanji.

February 2013 – The country conducts its third and first test under new leader, Kim Jong-un. The test is far larger than the previous two explosions with experts estimating the bomb to be between six and seven kilotonnes.

Pyongyang said it used a “miniaturised and lighter nuclear device with greater explosive force than previously”.

Experts in Japan, South Korea and the US put the quake in the Punggye-ri area at magnitudes of between 4.7 and 5.2.

January 2016 – North Korea says it conducted a fourth test – a miniaturised hydrogen bomb. A 5.1 magnitude quake was detected about 50km from Kilju city, near the Punggye-ri nuclear site.

Experts estimated the bomb to be between four and six kilotonnes.

September 2016 – A seismic activity of magnitude 5.3 was registered after an explosion of about 10 kilotonnes – 10 times stronger than what Pyongyang was able to test a decade earlier.

The quake, like the test nine months earlier, was detected close to the Punggye-ri underground nuclear test site.

September 2017 – A magnitude 6.3 quake is detected in Kilju county, where the country’s nuclear test site – Punggye-ri – is located. The latest test is the North Korea’s most powerful nuclear test to date.

The test, the first since President Donald Trump came to office, was estimated to have a yield of up to 100 kilotonnes – about four to five times stronger than the bomb dropped on Japan‘s Nagasaki. 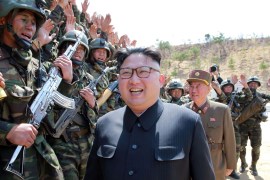 North Korea: ‘Whatever comes, we will handle it’