Qatar has rebutted a human rights group’s report that expressed concern about the safety of workers building stadiums for the 2022 FIFA World Cup in scorching summer heat.

The Supreme Committee for Delivery and Legacy (SC), which is overseeing the organisation of the football tournament in the Gulf state, issued a statement on Wednesday responding to concerns raised by US-based Human Rights Watch (HRW).

The organisation said on Wednesday that Qatar must do more to protect construction workers from intense heat and humidity that often reach potentially fatal levels.

While acknowledging the constructive feedback, the committee said: “We wholeheartedly refute the suggestion the SC has ‘abdicated responsibility’, or that the SC has failed to protect the lives of workers on our projects.

“We not only strive to ensure high health and safety standards on our sites, but also invest in initiatives to improve and enhance workers’ welfare,” the statement added.

HRW noted existing regulations in Qatar only restrict outdoor work from 11:30am to 3pm during the period from June 15 to August 31.

“But climate data shows that weather conditions in Qatar outside those hours and dates frequently reach levels that can result in potentially fatal, heat-related illnesses in the absence of appropriate rest,” it said.

Officials said last December that labourers would be given solar-powered “cooling” hard hats in the summer to reduce body temperature.

HRW also called on authorities to investigate the causes of migrant worker deaths and publish data on such incidents.

To date, there have been two work-related fatalities and nine non-work related deaths of workers engaged in the construction of Qatar’s World Cup stadiums.

Like other wealthy Gulf Arab states, Qatar relies on vast numbers of foreign workers, mostly from the Philippines, South Asia, and Africa.

About two million migrant labourers live in Qatar, outnumbering the local workforce by nearly 20 to one. Some 800,000 work in the construction sector.

Breaking with tradition by starting in the Gulf state’s much-cooler winter, the 2022 edition of the FIFA World Cup will take place from November 21 to December 18. 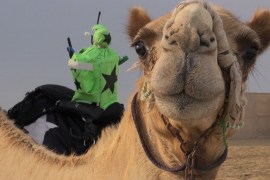 Weary camels sent back to Qatar amid GCC rift

Among the victims of GCC crisis are hundreds of Qatari-owned racing camels, shipped back from UAE via Oman’s seaport.