ISIL has released an unverified audio recording that it said was by its leader Abu Bakr al-Baghdadi, who called on the armed group’s followers to “resist the infidels”.

The date of the 46-minute recording, released on Thursday via the ISIL-linked Al-Furqan news organisation, was not clear.

But in it, the apparent leader of the Islamic State of Iraq and the Levant (ISIL, also known as ISIS) group referred to the North Korean threats against Japan and the United States.

It is the first apparent communication from the elusive leader in almost year, during which the group has lost much of the territory it controlled in Iraq and Syria.

The audio release, much of which is dedicated to religious scriptures, comes amid growing speculation over al-Baghdadi’s fate.

“The leaders of the Islamic State and its soldiers have realised that the path to … victory is to be patient and resist the infidels,” he said in the message.

In a statement to AFP news agency, a US intelligence official suggested the tape could well be real but added that it was still being verified.

“We are aware of the audio tape purported to be of Abu Bakr al-Baghdadi and are taking steps to examine it,” the source said.

“While we have no reason to doubt its authenticity, we do not have verification at this point.”

The armed group leader’s last recorded speech was issued in early November 2016, two weeks after the start of the battle for the Iraqi city of Mosul, when he urged his followers to fight the “unbelievers” and “make their blood flow as rivers”.

US-backed Iraqi forces have since defeated ISIL in Mosul, where al-Baghdadi declared a self-styled caliphate three years ago.

Fighters blew up Mosul’s landmark al-Nuri mosque where al-Baghdadi made his 2014 declaration after ISIL captured the city.

Officials have said they believed it could take years to capture or kill al-Baghdadi, as he is thought to be hiding in thousands of square miles of sparsely-populated desert between Mosul and Raqqa, in Syria.

Russia’s defence ministry said earlier this year it may have killed al-Baghdadi when one of its air raids hit a gathering of senior ISIL commanders on the outskirts of Raqqa.

But Washington said it could not corroborate the death, and Western and Iraqi officials were sceptical.

In July, the London-based Syrian Observatory for Human Rights also reported that it had “confirmed information” that al-Baghdadi was killed in Deir Az Zor province in eastern Syria.

With a $25m US bounty on his head, al-Baghdadi has kept a low profile and was rumoured to move regularly throughout ISIL-held territory in the area straddling Iraq and Syria. 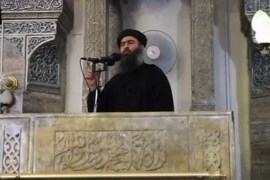 Russia’s defence ministry says Baghdadi was present at an ISIL meeting in Syria that was struck by Russian air force. 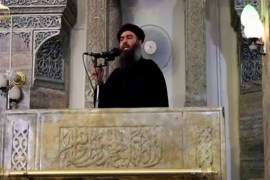