A car bomb blast near a popular market in the capital of Somalia, Mogadishu, has killed at least seven people, according to officials.

Thursday’s explosion, which also wounded several people, occurred alongside a densely-populated road near Hamarweyne market, an area that has previously suffered bomb attacks claimed by the al-Shabab armed group.

“The blast was caused by a luxurious car loaded with explosives, which was detonated at a civilian, densely-populated area, and seven people were killed and several others wounded,” Abdifatah Omar Halane, city administration spokesman, told reporters.

“There were eight people killed and most of them died in a civilian minibus which was passing by the area where the vehicle went off,” witness Abdinasir Mohamed, who gave a slightly higher death toll that authorities did not confirm, told AFP news agency.

Major Nur Hussein, a police officer, told Reuters news agency by phone that the explosive-laden car detonated just as a minibus carrying civilians was passing by. The death toll was likely to rise, he said.

Al-Shabab, which is fighting Somalia’s internationally recognised government, has repeatedly attacked civilian and military targets in Mogadishu and other towns with gunmen and suicide bombers. 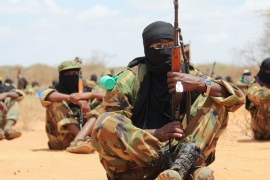 Attack claimed by the armed group al-Shabab targets governor’s office in the town of Beledweyne. 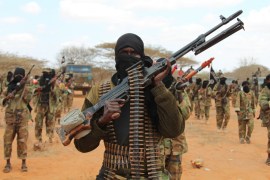 Fighters from the armed group carry out raid on army base in Bula Gudud near the southern port town of Kismayu.