Iraqi Kurds have voted overwhelmingly in favour of a split from Iraq, according to regional officials, as tensions soared between Erbil and Baghdad following a contested referendum.

Electoral commission officials on Wednesday told a news conference in Erbil, capital of the semi-autonomous Kurdish region in northern Iraq, that 92.73 percent of the 3,305,925 people who cast ballots voted “Yes” in Monday’s poll.

Any idea of secession is bitterly opposed by the central government in Baghdad, as well as neighbouring countries such as Turkey and Iran. The United Nations and the United States had also pressed Kurdish leaders to call off the poll.

Al Jazeera’s Hoda Abdel-Hamid, reporting from Erbil, said the announcement was in line with people’s expectations in the region.

“There’s a lot of satisfaction among people, and the Yes vote was a given for everybody,” she said.

“But when you ask them, ‘what’s going to happen next’, they do say that they think there will be a lot of problems.”

‘Referendum must be annulled’

Masoud Barzani, president of the Kurdish Regional Government (KRG) has said the vote will not lead to an immediate declaration of independence and should instead open the door to negotiations.

But Iraqi Prime Minister Haider al-Abadi – who rejected the referendum as illegal – told legislators on Wednesday there was no question of using its results as the basis for talks.

“The referendum must be annulled and dialogue initiated in the framework of the constitution. We will never hold talks based on the results of the referendum,” al-Abadi said.

“We will impose Iraqi law in the entire region of Kurdistan under the constitution,” he said.

The vote took place in three governorates that make up the region and in some disputed areas, including the oil-rich province of Kirkuk and parts of the northern province of Nineveh.

Later on Wednesday, Iraqi parliament called for the deployment of troops to Kirkuk to take control of its oilfields, state TV reported.

“Politicians in Baghdad asked al-Abadi to take over – or take back, depending which way you look at it – the so-called disputed territories that are now under control of the Kurdish forces,” Al Jazeera’s Abdel-Hamid said.

“And then there’s the issue and the threats about taking the international land borders of the Kurdish region back under control of the federal government,” she added.

The Iraqi Civil Aviation Authority sent a notice on Wednesday to foreign airlines telling them international flights to Erbil and Sulaimaniya in the Kurdish region would be suspended on Friday at 15:00 GMT and only domestic flights allowed

Lebanon’s Middle East Airlines (MEA) said on Wednesday it would suspend flights to and from Erbil airport from Friday.

“For now, we’re stopping. The last flight is on the 29th, until they solve the issue,” MEA chairman Mohammad al-Hout told Reuters news agency.

Humanitarian and “emergency” flights are exempted, provided they are pre-approved by Baghdad.

Pressure has been mounting on the Kurds since the vote, not just from Baghdad but also from Ankara, with Turkey threatening a range of measures, including cutting off key export routes for the region.

In a televised speech from Ankara on Tuesday, President Recep Tayyip Erdogan threatened to impose sanctions against the semi-autonomous Kurdish region, saying it “will be left in a lurch” and its people would go hungry.

Turkey has long been northern Iraq’s main link to the outside world, but sees the referendum as a threat to its national security, fearing it will inflame separatism among its Kurdish population.

“It will be over when we close the oil taps, all [their] revenues will vanish, and they will not be able to find food when our trucks stop going to northern Iraq,” Erdogan said. 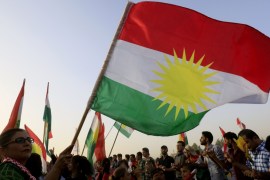 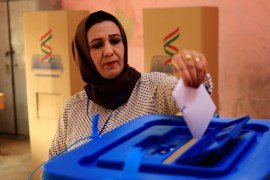 Polls open in northern Iraq as Kurds cast ballots in referendum on whether to support separation from Baghdad. 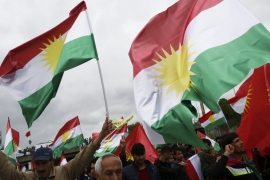