Amnesty International has initiated an online campaign and petition calling for people’s support to stop India’s plan to deport thousands of Rohingya refugees living across India.

Characterising Rohingya refugees and asylum-seekers as illegal immigrants and deeming them “security threats” will expose them to grave risks if forcibly returned, the rights group said on Monday, while pushing the #istandwithrohingyarefugees campaign online.

Last week, India’s government said it had evidence showing that some Rohingya in the country have ties to “terror organisations” and pose a security threat that justifies a mass deportation of the approximately 40,000 Rohingya.

“In terms of India’s position, it is their legal and moral obligation to not allow the expulsion from happening,” Arijit Sen, project manager at Amnesty International India, told Al Jazeera.

“They have been in India for a while, taking small steps, living their lives with dignity. If India has any security concerns, they should understand that not all of them can be viewed through one lens.

“These people are in danger back in Myanmar and need support.”

Al Jazeera tried to reach out to the ruling party office for a comment but a spokesperson declined to speak on the issue.

A majority of the Rohingya are Muslim, who have often been described as “the world’s most persecuted minority”.

They have lived for centuries in the Buddhist-majority Myanmar, where they have faced growing violence, with hundreds of thousands being forced to flee to neighbouring countries.

The Rohingya are denied citizenship in Myanmar and regarded as “illegal immigrants”, despite claiming roots that date back centuries.

In a previous Al Jazeera story, Rohingya refugees in India said they were being targeted because they were Muslim.

“It fits into the larger policy that any Hindu coming from anywhere is welcome and can get a long-term visa, but if a Muslim is coming then there is a difficulty,” Mohammad Haroon, who runs a small grocery store, told Al Jazeera. 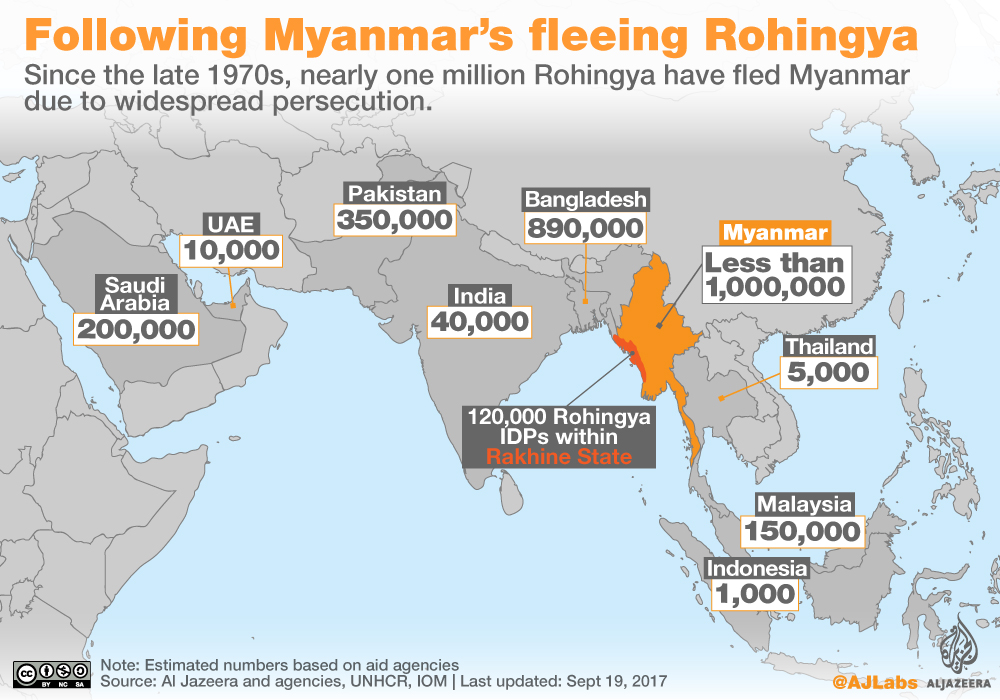 Rights activists have criticised the government over a controversial citizenship law that includes a provision for welcoming refugees facing persecution. This provision specifies “Hindus, Sikhs, Buddhists, Jains, Parsis and Christians from Afghanistan, Bangladesh and Pakistan”, but notably excludes Muslims.

“The Citizen Amendments Bill allowed persecuted people from the Hindu, Sikh and Buddhist faiths to get Indian citizenship, but Muslims were not allowed even if they were persecuted,” Apoorvanand Jha, an academic and activist based in the Indian capital, New Delhi, had told Al Jazeera.

Modi visited Myanmar in the first week of September – his second visit in three years – and held talks with Aung San Suu Kyi in the capital Nay Pyi Taw.

A joint statement issued at the end of their talks failed to mention the brutal military crackdown on the Rohingya.