Turkey’s parliament has approved the extension of a mandate that allows the deployment of troops in Iraq and Syria if faced with national security threats.

The move on Saturday came two days before an independence referendum in Iraq’s semi-autonomous Kurdish region – a vote denounced by Ankara as a “mistake” and a threat to its security and regional stability.

The motion was backed by members of parliament (MPs) from the ruling Justice and Development Party, as well as the main opposition Republican People’s Party (CHP) and Nationalist Movement Party. MPs from the People’s Democratic Party (HDP) voted against it.

The mandate had previously allowed the Turkish military to carry out cross-border operations from October 2, 2016, until October 31, 2017.

The motion said that Turkey places great importance on the protection of Iraq’s territorial integrity, national unity and stability.

The bill read in parliament listed combating Kurdish fighters in Syria and Iraq and the Islamic State of Iraq and the Levant (ISIL) armed group as national security requirements for Turkey.

It also emphasised the importance of Iraq and Syria’s territorial integrity and said “separatism based on ethnicity” poses a threat to both Turkey and regional stability.

The Kurdistan Regional Government (KRG) plans to hold the referendum on support for independence in three governorates that make up the region in northern Iraq, and in some disputed areas, including the oil-rich province of Kirkuk and parts of Nineveh province.

KRG President Masoud Barzani reiterated on Saturday that any postponement of the vote is out of the question.

“Holding a referendum is the decision of the people,” Barzani said as he met French ambassador to Iraq Bruno Aubert at his residence in Erbil, according to a statement issued by his office.

The poll would not be postponed but be held on schedule, he added.

“With our 80 million citizens and the 780,000sq km of our homeland, we will never tolerate any adventurism for our country’s security or the welfare of our nation,” he told reporters in the central Anatolian province of Kirsehir.

Calling the referendum the “wrong decision,” Yildirim added: “As a neighbouring country, Turkey has given the necessary warning in a friendly way since the beginning. But we see that these warnings have not been heeded.” 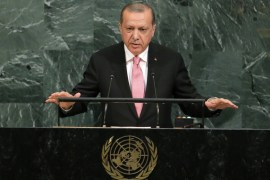