North Korea has warned that US President Donald Trump‘s bellicose remarks against the Asian country and its leader will make the US mainland an “inevitable” target for rocket attacks.

North Korean Foreign Minister Ri Yong-ho’s remarks on Saturday in a speech at the United Nations General Assembly came hours after the US flew bomber jets near North Korea.

“Through such a prolonged and arduous struggle, now we are finally only a few steps away from the final gate of completion of the state nuclear force,” Ri told the annual gathering of world leaders in New York.

Trump responded on Twitter by once again insulting North Korea’s leader Kim Jong-un, calling him “little rocket man” and saying him and Ri “won’t be around much longer”.

Just heard Foreign Minister of North Korea speak at U.N. If he echoes thoughts of Little Rocket Man, they won't be around much longer!

Tensions between the US and North Korea have risen in recent weeks.

Kim hit back, dubbing him a “mentally deranged US dotard” who would face the “highest level of hardline countermeasure in history” in retaliation for the US president saying Washington would “totally destroy” the Asian country if it threatened the US or its allies.

“It is a war of words with a very dangerous edge,” Al Jazeera’s Mike Hanna, reporting from the UN headquarters in New York, said.

“We are talking about two potentially nuclear powers coming into a confrontation being edged on by a level rhetoric seldom seen and certainly not heard within the confines of the UN General Assembly,” he added.

Trump announced new US sanctions on Thursday that he said would allow targeting of companies and institutions that finance and facilitate trade with North Korea.

In response, Ri said on Saturday that “it is only a forlorn hope to consider any chance that the DPRK (Democratic People’s Republic of Korea) would be shaken an inch or change its stance due to the harsher sanctions by the hostile forces.”

Earlier this month the UN Security Council unanimously adopted its ninth round of sanctions on Pyongyang to counter its nuclear and ballistic missiles programmes.

Ri, who said Pyongyang’s ultimate goal was to establish a “balance of power with the US”, retorted that Trump himself was on a “suicide mission” after the US president said Kim was on such a mission.

The US bombers’ flight was the farthest north of the demilitarised zone separating North and South Korea that any US fighter jet or bomber has flown in the 21st century, the Pentagon said.

Ri warned Pyongyang was ready to defend itself if Washington showed any sign of conducting a “decapitating operation on our headquarters or military attack against our country”.

Richard Ponzio, director of the Just Security 2020 programme at The Stimson Center, said, “This past week’s troubling war of words certainly has the potential to get out of hand and result in a regrettable situation for all parties.”

Speaking from Washington, DC, Ponzio told Al Jazeera that actions such as the US bombers’ flyover and the talk of more rockets launches by the North Koreans “is certainly not helping the situation”.

“Pressures need to be brought down and dialogue needs to commence – and this is the proper role for the UN, not what we heard this past week by many leaders on many sides,” he said. 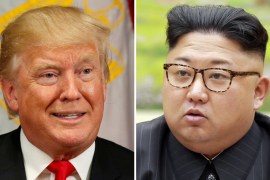 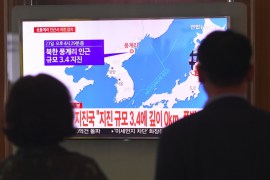